Needless to say, this is not acceptable.

Efforts to beef up oversight of the nation's oil pipelines are progressing so slowly that it's unlikely any additional safeguards will be in place before construction begins on thousands of miles of new pipelines, including the proposed Keystone XL.

Part of the delay stems from how slowly the Pipeline and Hazardous Materials Safety Administration (PHMSA)—the federal agency with the authority to issue new regulations—is moving on its rulemaking process. For instance, PHMSA began examining at least six safety regulations in October 2010, three months after a ruptured pipeline spilled more than 1 million gallons of oil into Michigan’s Kalamazoo River. None of those changes is in effect nearly two years later.

Congress's latest pipeline safety bill, which was signed into law in January, did little to speed up the process.

The measure did not address two of the key regulatory failures that InsideClimate News found during a recent seven-month investigation of the Michigan spill. It did not force PHMSA to enforce deadlines for repairing pipeline defects or require that pipeline operators identify exactly what type of oil is flowing through their lines. Both of those failures were also detailed in a report released this month by theNational Transportation Safety Board.

"Tens of thousands of miles of new pipelines are going into the ground, and there aren’t going to be regulations that make them safer for years," said Carl Weimer, executive director of the Pipeline Safety Trust, a nonprofit watchdog organization based in Bellingham, Wash.

1 min. read
For those who argue that the investment tax credit (ITC) for solar PV projects is not worth the taxpayers' money, a new study by "a coalition of senior level financiers who invest in all sectors of the energy industry" tells a diametrically different story! A few highlights illustrate why we say that:
Continue Reading

At Time's "Swampland" blog, Michael Grunwald has a superb article entitled, "Why on Earth Would the Obama Campaign Call Solyndra ‘Successful and Innovative’? Because It Was," in which he shreds, dismantles, deconstructs, and otherwise demolishes the "cauldron of stupidity" (his words) that sums up not just "the entire Solyndra pseudo-scandal," but also the brain-dead attacks by Darrell Issa, Mitt Romney, and other dirty energy industry tools. In fact, as Grunwald explains, Solyndra not only was NOT a scandal, it actually was:

"Solyndra and the Republican Outrage Machine"

We just wanted to point out a great article by Katrina vanden Heuvel of The Nation called "Solyndra and the Republican Outrage Machine." Here's an excerpt, bolding added for emphasis:

Below are excerpts from an interesting article at AOL Energy, providing yet more evidence - on top of stories like this one about record investment in renewable power - that cleantech is increasingly where it's at from a hard-nosed business and investment perspective.

Why Does a Massively Profitable, Fossil-Fuel-Burning Utility Need Taxpayer-Funded Welfare?

We often question why highly profitable fossil fuel companies receive subsidies - both implicit and explicit -  and favors of various kinds. Today, we came across yet another example of what we're talking about.

Father of Fracking: "They should have very strict controls" on Fracking

Well, well, well, apparently all that money spent by the natural gas "fracking" industry to convince people that what they do is safe, and not in need of any further regulation, isn't working.

Top 10 Reasons Why Fracking is “Fracked Up”

Clearly, there are many reasons not to like hydraulic fracturing, or "fracking." Here are our Top 10 for your reading pleasure and (hopefully) edification.

Yet more evidence that Americans overwhelmingly support clean energy, and also that clean energy is a big-time winner economically.

Something tells us the cleantech haters on Fox News Channel won't be talking about this story anytime soon.

It’s Electric! (Cars That Is, Not Tacky Wedding Dances) 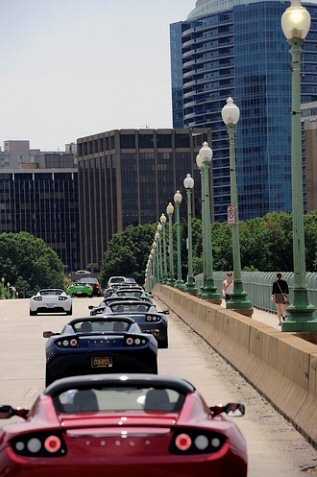 The Yale Project on Climate Change Communication is out with a new survey, conducted in March 2012, on "Americans’ Actions to Conserve Energy, Reduce Waste, and Limit Global Warming."  Key findings include:

Suntech America President Concerned About Harm to Solar Industry, Depending on Who Wins U.S. Elections

As we all know, this is an important election year - for president and control of Congress - in the United States, one with the potential to create significant changes in federal government policy towards clean energy starting in early 2013.  Along those lines, the following article at AOL Energy caught our eye:

The utter ignorance of U.S. Senator Scott Brown here is stunning. It also seems to be a pattern; for instance, back in April, Rep. Dan Benishek of Michigan claimed that "[t]here are no government subsidies of oil” and that “[t]he government does not give oil companies money."

Nationwide Will No Longer Cover Damages from Fracking; Risks "too great to ignore"

It's one thing when environmentalists and clean energy advocates raise the red flag about the enormous environmental risks - first and foremost to our nation's water supplies - entailed by hydraulic fracturing ("fracking").  Critics can argue, even if it's not the case, that those groups are biased against them. It's a completely different thing, though, when a major U.S. insurance company decides that fracking is simply too hot to handle, strictly from a dollars-and-cents, bottom-line business perspective.

The lengths to which the coal companies will go in order to find someone, anyone willing to defend them apparently knows no bounds.