At Get Energy Smart! NOW!, Adam Siegel points us to a letter "Greenpeace has sent to the Securities and Exchange Commission (SEC) making a case that TransCanada is potentially in violation of security laws due to its use of inflated job figures as part of a strategic influence campaign to drive the Obama Administration into supporting this misguided and risky venture." According to the letter:

Here's some potentially good news from Pennsylvania with regard to keeping our water supplies safe:

President Obama: "I will not walk away from the promise of clean energy"

A significant section of President Obama's State of the Union address Tuesday night discussed energy issues.  According to David Roberts of Grist, it's important to emphasize that the president "does not control domestic policy," that "this Congress has shown little appetite for doing, um, anything, [therefore] it’s highly unlikely that Obama’s proposals will become law," and that "in an election year, the SOTU shows which fights the administration feels comfortable fighting and thinks it can win."

There's a new story at Wired Magazine, dramatically - but misleadingly - entitled "Why the Clean Tech Boom Went Bust."  In addition to the misleading title, the article also comes with not-particularly-subtle images of a wind turbine and a container of biodiesel on fire and spewing smoke. As for the article itself, the tone is most definitely not optimistic:

Yesterday afternoon, the White House issued a statement rejecting – at least for now - the proposed Keystone XL tarsands pipeline from Alberta, Canada to the Texas Gulf Coast.  That was the correct, even courageous, decision, pushing back against the powerful forces that support this expensive, risky, and job-killing project.

A new Defense Department report has good news for solar power potential, but only if the government takes necessary measures to unlock that potential. First, here's the good news:

MIT News informs us of a new study, The Influence of Shale Gas on U.S. Energy and Environmental Policy, which optimistically concludes that "though the shale [gas] future is uncertain, these concerns are overstated." However, there are a few problems with this study you might want to be aware of.

Over at Grist, Stephen Lacey of Climate Progress makes a compelling argument that 2012 is not the year for clean energy supporters to lie low. According to Lacey:

Bloomberg: Shale Gas and Oil Speculative "Bubble" Building; When Will it Burst?

In recent years, we've seen what happens when gigantic speculative "bubbles" build up, whether in the high tech sector or in the housing market. Eventually, the bubble bursts, and a lot of people get hurt in the process. Now, an article in Bloomberg is raising the possibility of a similar phenomenon occurring with oil and natural gas shales.

In a recent editorial, the New York Times makes the same argument we've also been making for a long time now, that "Congress should end the subsidies to Big Oil and redeploy the money saved to support truly new energy technologies, like wind and solar power..." Why? According to the Times, because they are "arcane and unnecessary," costing taxpayers " roughly $4 billion a year."

Green Building Sector Looking Strong for 2012 and Beyond

When one considers the potentially biggest “bang for the buck” we can get in terms of energy cost savings and pollution reductions, the building sector certainly ranks high on the list. According to the U.S. Energy Department, the U.S. building sector “alone accounted for 8% of global primary energy consumption in 2008,” with nearly 40% of U.S. energy consumed – and carbon dioxide emitted - by buildings. Thus, as the EPA’s “Green Building” website points out, building green comes with enormous benefits – environmental, economic, and social. In addition, although green building “may cost more up front, [it] can save money over the life of the building through lower operating costs.” That’s a win-win situation no matter how you look at it.

Time for Everyone to "Vote for (Clean) Energy!"

To understand why it's time for everyone to "vote for energy," check out the above video (source). Yes, that's a parody - and a funny one at that - of a new ad campaign by our friends at the American Petroleum Institute. This article explains what's going on: 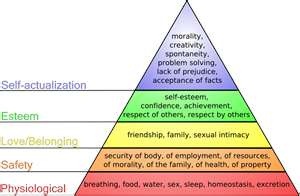 Despite spending massively to position itself as “clean,” the natural gas industry has a serious pollution problem it doesn’t want getting more public and regulatory attention.

Except that it isn’t.

We’re not talking about small amounts of waste water, either: “During the first month of drilling and production alone, a single well can produce a million or more gallons of waste water that can contain pollutants in concentrations far exceeding those considered safe for drinking water and for release into the environment.”

If you don’t remember it from school, drinkable water is at the bottom of Maslow’s Hierarchy of Needs.

Drinking water isn’t just critical to life. Ruining readily available supplies of it is a cost, and a big one.

So it’s natural to expect that a credible study on the “economics” of the gas industry would have to account for the costs of permanently ruined drinking water supplies…unless, of course, gas industry lobbyists paid to produce it.

Take the recent IHS Global Insight study commissioned by America's Natural Gas Alliance (“ANGA,” with members such as Anadarko, Apache, El Paso, and Cabot Oil & Gas). The study has an expectedly dry title to build credibility: “The Economic and Employment Contributions of Shale Gas in the United States.” And, it has claims just waiting for politicians to use, such as “shale gas production supported more than 600,000 jobs in 2010, a number that is projected to grow to nearly 870,000 million by 2015, while contributing more than $118 billion in GDP.”

But, when we read the study, we noticed there isn’t a mention of the costs of permanent drinking water contamination. When we contacted IHG repeatedly to ask about the omission, we got this answer from IHS Global Insight’s John Larson:

The study was not intended to be a cost/benefit analysis. The study represents IHS Global Insight’s expertise as an economic modeling firm. It contributes rigorous and independent research on the economic contribution of the shale gas industry as well as the economic benefits (on the macro economy and selected industries) of the lower gas prices that are a result of developing shale gas resources. It was designed to contribute this important piece of critical information to the broader set of issues already in the public forum to better facilitate the national dialogue. [emphasis added]

We pressed the point by asking if they had any thoughts on the costs of shale gas production. No response.

Perhaps that’s because there isn’t a credible response to give. To date, the gas industry’s response to concerns about drinking water contamination has ranged from flat denial to asserting that the pollution is “naturally occurring.” Its remedy has been to provide big drinking water tanks (“buffaloes”) to people whose water has been ruined.

But as it contaminates more drinking water, won’t becoming a permanent bottled water utility to tens of thousands of Americans become a financial drag for an industry that many suspect is already in the midst of a bubble? Asthis article in The Oil Drum put it: “The true structural cost of shale gas production is higher than present prices can support,” with “most wells…not commercial at current gas prices” (under $4 per thousand cubic feet, compared to a required $8-$9 per thousand cubic feet “ to break even on full-cycle prices”).

The point is that calculating pollution’s costs might not be some back-of-the-envelope exercise, but it often favors clean energy over dirty.

Perhaps the ANGA lobbyists and Mr. Larson convinced themselves that by including the word “benefits” in the title, they could leave enormous costs out of the “critical information” they say they produced, and still be taken seriously. But when an industry’s costs to the country are potentially massive and permanent, that’s not a serious way to present itself.

The better, family-friendly word for that type of effort is, “propaganda.”

With all the misinformation out there about the proposed, Keystone XL tar sands oil pipeline, stories like this one need to be widely reported.  In short, the article explains why Mike Klink,  "a civil engineer and an inspector for TransCanada during the construction of the first Keystone pipeline," does not believe that the first Keystone pipeline is safe, and that there's no reason to think the second one would be any better. According to Klink:

This is the first in a series of occasional posts I’m writing to grow an idea I’m calling “Deep Accountability.”

Turning "Boreal Forest into a carbon-spewing pit of tar sands"

Stephen Lacey has a short but powerful post at Grist that dramatically illustrates "what happens when you turn a carbon sink like the Boreal Forest into a carbon-spewing pit of tar sands." It's not a pretty picture - literally - as you can see below.