A few weeks ago, my Tigercomm colleague Mark Sokolove and I were able to take Scaling Green’s Communicating Energy lecture series on the road to the Solar Power International 2011 (SPI) conference and trade show in Dallas, Texas. While there, we spoke with several leaders in the solar and cleantech industries. You can read about and view the interviews on The Solar Foundation’s (TSF) National Solar Jobs Census 2011 – a census showing record jobs growth in the industry - on Scaling Green. Today, we turn our focus to the wildly inflated Solyndra story.

Can Obama Go Back to Political Base(ics)?

The Associated Press has a fascinating story about how fossil fuel-powered U.S. utilities and other businesses are telling two, starkly different stories - one to the SEC, one to politicians - when it comes to the impact of proposed environmental regulations on their industries' bottom lines.

A brand new study highlights what we've been arguing for a long time: that not only is support for clean energy and for ending taxpayer-funded corporate welfare to the dirty energy industry the right thing to do, it's also highly popular with the American public.  Here are a few findings from this new polling by the Yale Project on Climate Change Communication and the George Mason University Center for Climate Change Communication.

As if there weren't already enough reasons to switch from fossil fuel-fired power generation to clean, abundant, renewable energy, here's another strong one from the Union of Concerned Scientists:

New Report: 56% of Tax Subsidies Go To Just 4 Industries. Guess Which Ones?

Joe Romm of Climate Progress makes an important point, that although Solyndra's $500 million loan has gotten enormous press coverage, in fact "56 percent of the total tax subsidies [from 2008 to 2010] went to just four industries: financial, utilities, tele-communications, and oil, gas & pipelines." The full report, by the Citizens for Tax Justice & the Institute on Taxation and Economic Policy, is available here. A few more points of note from that study:

As we've been saying for some time now, fossil fuels receive vast amounts of taxpayer-funded government welfare, and have been receiving that welfare for over 100 years in many cases. Now, thanks to the International Energy Agency, we know how much more in government aid dirty energy receives worldwide, as opposed to clean energy. It's mind boggling.

"The Story of Broke": How We Go Broke Propping Up the "Dinosaur Economy" of Oil, Coal, and Gas

If you haven't seen it, "The Story of Broke" video, by Award-winning internet filmmaker Annie Leonard and the good folks at The Story of Stuff, is well worth watching. The video explains how the United States is far from broke, but is in fact "the richest country on the planet and a country in which the richest among us are doing exceptionally well." The issue, clearly, is how we spend our money.

Energy subsidies expert Doug Koplow of EarthTrack skillfully and forcefully refutes the utterly absurd argument, made by an oil-funded shill named Bernard Weinstein, that "renewable power industry has become addicted to federal subsidies and probably can’t stand on its own without them."  It's not true, of course, and Koplow duly demolishes it:

Prior to the eruption of the Solyndra story, we had the opportunity to have Stephen Lacey of ClimateProgress as a Scaling Green “Communicating Energy” lecture series guest. He became well known in cleantech circles during his years as editor and producer at Renewable Energy World, where he won a 2010 Neal Award for his Inside Renewable Energy podcast. Since then, Lacey’s risen to wider national recognition as an influential energy and environmental writer at ClimateProgress, run by climate policy blogging giant Joe Romm.

Summer vacations and the Solyndra swirl had me wait an embarrassingly long time before posting the highlights of Stephen’s visit with us. His points back then? That clean energy policy will be “a long slog;” that energy policy circles largely ignore government welfare to dirty energy while exaggerating the relatively miniscule policy support provided to clean energy; and that Washington generally doesn’t “get” cleantech. The post-Solyndra salience of his pre-Solyndra remarks show the quality of Stephen’s periscope.

His thoughts on where clean energy is heading:

Generally, the trends within the business community are pretty positive, and moving from reporting on the business of clean energy and coming down to DC to be closer to the political environment, I’ve been struck how difficult things are here…we reached the 1-year mark last Friday of when Congress and the President dropped a comprehensive climate and clean energy bill.  And one year on, we have no movement on a clean energy standard, we have the loan guarantee program running out of funds. …and our biggest political fights are over the efficiency of light bulbs and whether or not we should have Styrofoam in the congressional cafeterias.

Lacey also noted, in a discussion preceding this lecture, that, although “cleantech is hot in lots of parts of the country…people in DC don’t get it. The national policy discussion is very backwards,” a combination of “institutional inertia and the influence of polluting industry lobbyists.” As a result of these forces holding back clean energy, Lacey concluded, the policy discussion in Washington, DC is “going to be a long slog.” 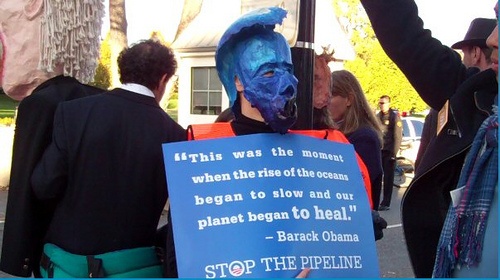 I was at Lafayette Park and around the White House today, participating in and covering the massive protest against the proposed Keystone XL dirty tar sands oil pipeline from Canada to the U.S. For now, I'm mainly going to focus on getting video and photos (click here for my Flickr set) up (see the "flip"). Let me just say GREAT job by the amazing, indefatigable environmental activist Bill McKibben for organizing this. Also, in general, there was tremendous energy there today, tons of young people, totally peaceful (yet determined), demanding forcefully that President Obama keep his promise to stop the destruction of this planet's climate and to get us off of our oil addiction. I couldn't agree more.

New Survey: "Fossil fuel subsidies are opposed by Americans on a bipartisan basis."

According to a new survey of 1,049 Americans, there is "a major gulf between the views of Americans and the Congress/White House on energy policy," with the American people overwhelmingly supporting a move away from fossil fuels and towards clean energy. A few key findings of the survey include:

You've probably seen ads by the oil industry (hard to miss, they're pretty much ubiquitous) claiming that the proposed Keystone Canadian oil sands pipeline project would create hundreds of thousands of new jobs in America.