Seven Reasons to Walk Away From Keystone XL 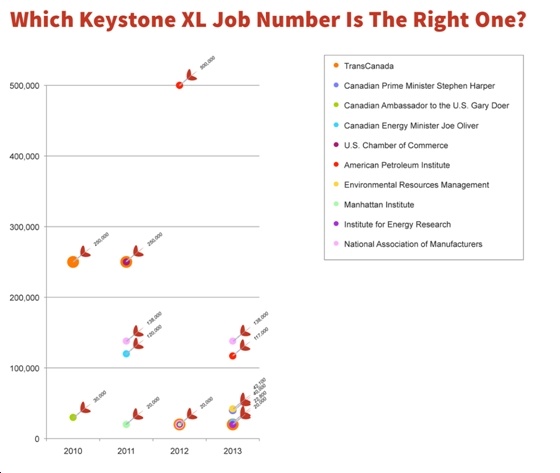 There is less than a month before the justices of the Nebraska Supreme court hear arguments in a case that will have a big impact on TransCanada's proposed Keystone XL pipeline. The court will hear the argument that ranchers and farmers in the pipeline's path must have their lifestyles ruined first before standing up to the bullying and lies by TransCanada. I'm not making that up - it's the actual argument that TransCanada's apologists are saying. Good luck with that.

The folks at Bloomberg New Energy Finance (BNEF) are out with a fascinating paper, which they call a "thought experiment," on the fossil fuel divestment movement - of which we're big supporters - and what it would look like if it achieved "trillion-dollar scale." Here are a few key points, followed by some thoughts of our own.

The next time the coal industry wags its finger at clean energy about "standing on its own two feet," someone should tell them to pay for their taxpayer-funded "clean coal" science project.

According to a new article in OilPrice.com, China is busy "cutting its dependence on coal, oil and natural gas and replacing it with solar at a breakneck pace."

Clearly, we believe it makes sense to slash the air and water pollution that is inextricably linked to fossil fuel extraction, processing, and consumption.  We also strongly believe that moving from a dirty to a clean energy economy makes sense on a whole host of levels -- economic, environmental, national security, health, etc.  Yet opponents of a clean energy transition invariably raise claims that it will cost too much to do so, even though research has shown that fossil fuels are actually FAR more expensive than they appear to be, in large part because they are allowed to pollute without having to pay for doing so. Thus, the full “lifecycle cost” of coal to the U.S. public is actually upwards of $500 billion a year, but you won't find that $500 billion a year incorporated into the price of coal, making it artificially cheap, and strongly skewing U.S. energy markets in favor of fossil fuels. Incorporate all the health and environmental "externalities" associated with fossil fuels, while taking away the enormous subsidies they receive from taxpayers, and it's a totally different story -- one in which clean energy would win by a wide margin.

The release in late May of EPA's draft rules on carbon pollution at existing power plants gave individual states a tremendous amount of flexibility in how they meet the proposed targets.  For instance, a state rich in potential solar power resources might choose to focus on increasing the percentage of its electricity generated from the sun.  Same thing with wind power.  And, of course, all states can use energy efficiency gains as a key part of their plans. As the Center for Climate and Energy Solutions explains:

We all know that the Koch brothers are seriously bad news, having built their fortune on super-dirty tar sands oil, spent millions of dollars to promote dirty energy while trashing clean energy and the environment, and funded a variety of fossil-fuel front groups like this one. Now comes a new report which details the "job loss, significant environmental damage, or both, at the hands of the Kochs' business empire" in key states across America. For instance:

Sometimes, you read a news story that makes your head spin around a bit.  The latest example: Rick Perry and Other Republicans Are Loving an Obama-backed Green Car Company by Ben Geman of the National Journal. The irony and "cognitive dissonance" (as former Solyndra PR representative Ryan Cunningham puts it) abound, as numerous conservative Republican governors compete "to lure Tesla's planned multibillion-dollar battery plant, called the Gigafactory, to their states." Here are a few highlights from the article:

This article isn't directly cleantech related, but it does apply to those working in cleantech - or any other industry for that matter. Specifically, it highlights the importance of segregating electronic interruptions and social media, and of taking work-free, electronics-free vacations.

Bill Torre of the UCSD Center for Energy Research on Microgrid Developments, Obstacles and the “Solar Happy Hour”

Recently, we had a chance to chat with Bill Torre of the University of California San Diego's Center for Energy Research at Greentech Media's Grid Edge Live conference in San Diego. Torre is an expert in energy storage, microgrid operations, and automated demand response, among other things.  In this interview, we wanted to focus on microgrids' advantages and disadvantages, the potential obstacles to large-scale microgrid development, and the potential for increased renewable penetration with the spread of microgrids. Finally, we were curious about the "Solar Happy Hour" concept Torre mentioned in his talk at Grid Edge Live.

There's a great deal of misinformation out there about Germany's ongoing transformation from a fossil-fuel-dominated power sector to one that's increasingly clean, green and renewable.  For instance, as Solar Energy Industries Association President Rhone Resch explains at EcoWatch, the anti-solar-power Edison Electric Institute recently commissioned a "hatchet job on renewables" that, among other problems, makes "no mention of the enormous societal costs of the damaging pollution which is caused by burning fossil fuels and undeniably driving climate change."

Video: Bush Administration EPA Chief On Fox News - “I would have done a regulation on carbon, absolutely"

Great job by former Bush Administration EPA Administrator Christie Whitman, for pushing back against Fox News' disinformation on the importance of regulating fossil-fuel-related carbon pollution, and for flatly asserting that she would have done so as well if she were EPA Administrator today. Of course, the fossil fuel industry isn't happy about finally being forced to reduce the pollution it dumps into the atmosphere, but the rest of us should all have big smiles on our faces -- not to mention cleaner air in our lungs.