On June 14, the U.S. Energy Information Administration (EIA) reported a landmark development in U.S. power markets: "For the first time, monthly electricity generation from wind and solar (including utility-scale plants and small-scale systems) exceeded 10% of total electricity generation in the United States." As you can see from the graphic below, this isn't a fluke; to the contrary, wind and solar have been growing inexorably for years now, and there's certainly no sign that this will stop any time soon. 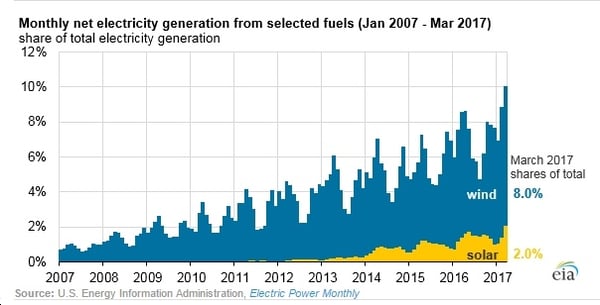 Given the rapid penetration of solar and wind power onto the U.S. power grid, questions have been raised regarding how high a percentage so-called "variable renewable energy" sources can constitute without harming power grid reliability. For more on that, check out Greentech Media's most recent Energy Gang podcast, which has a fascinating, informative discussion regarding "a new study countering Mark Jacobson's 2015 report showing that we can source 100 percent of America's energy from wind, solar and water." The bottom line, though, is that the debate is mostly about how close to 100% clean energy we can get, not whether this is the right way to go for a host of economic and environmental reasons.

Of course, as the shares of solar and wind power increase, the shares of traditional, "baseload" (e.g., highly reliable) power sources like coal are declining. The question is whether this a problem in any way. Here are some key points from a new study by the Brattle Group for NRDC, entitled "Advancing Past 'Baseload' to a Flexible Grid," which argues that far from being a problem, a higher share of clean energy is actually a great opportunity for a wide variety of reasons.