The Importance of Public Relations in the Micromobility Industry

The Importance of Public Affairs in the Micromobility Industry

Micromobility (MM) risks the fate of other disruptive industries that underinvested in public affairs — and were wiped out by politicians as a result. The gaps in other sectors’ missteps have included: ineffective campaigns at the local level, lack of supportive coalitions, staff without government experience, and not showing officials how supporting micromobility is politically safe and beneficial. Among the approaches micromobility should consider: consistently using social media to flag riders on pending policy decisions that affect them, driving calls to action using segmented data, and engaging riders in taking “microactivism” steps from their phones.

For many fans of MM, it’s hard to imagine scooter and bike companies getting stopped in their tracks by local officials. Pre-pandemic, ridership was exploding among a wide cross-section of people seeking fun, inexpensive, last-mile transit.

But as other sectors have learned, local regulations can be costly constraints on growth, even if they aren’t fatal.

The industry executives that our team interviewed were unanimous in naming safety as the main driver of local officials’ concerns. Science Daily reported that, “the number of scooter-related injuries and hospital admissions in the United States grew by 222 percent between 2014 and 2018 to more than 39,000 injuries.”

The growing safety problem has attracted what Bird’s David Strickland describes as the “outsized attention e-scooter injuries have garnered in the media.” The result was a first-ever “injury study” by the City of Austin, an analysis by Consumer Reports, and a newly formed coalition of city officials to develop safety guidelines.

Tigercomm has conducted an in-depth communications analysis of the marketing and public affairs landscape for several disruptive, clean economy sectors.

For me (Mike), charting the success path for micromobility is personal and professional. As a frequent e-scooter customer, I also ride my Onewheel to business meetings. I’ve seen firsthand how this new sector is helping to cut pollution, make cities more livable and acculture millions to no-car transit options that aren’t behind a steering wheel. Micromobility is perfectly suited to shifting the mindset of millions of consumers, an absolute necessity for driving many of the big changes required to address global climate disruption.

But as an MM user, I also experience how infrastructure gaps and outdated policies act as a drag on micromobility’s growth. As MM execs told us, safety concerns drive local bans and restrictions far more than public nuisance complaints about scooters and bikes left in pedestrians’ way. At the heart of MM’s challenge is a deadly formula we’ll call the Micromobility Drag Coefficient:

It’s up to micromobility companies to strengthen their case to operate within the current infrastructure, but also to promote the steps for safer riding. That will require public communications far more sophisticated than what young companies can typically muster.

This article combines our findings with a condensed set of lessons from other clean economy sectors. We want to offer micromobility companies recommendations that are specifically adapted to their distinct assets and challenges. For the biggest micromobility players, we’re seeking to gently challenge their practices, which are evolving quickly enough that some of our analysis will be obviated when they read this. For the younger, smaller companies, the available lessons might have to be applied as their growth continues.

To analyze the micromobility industry, we took the following steps:

When we compared market leaders, Lime and Bird, we found that local news media referenced “the scooter companies” far more than they distinguished the individual companies. In various measurements, counts of the word “scooter” occurred far more frequently than any of the actual companies’ names. Articles mentioning one scooter company often mentioned others as well.

The overall data showed a set of companies placing heavy digital emphasis on product promotion, and little on lifting the expensive local regulatory constraints the companies’ say is their main growth constraint.

In particular, we observed:

Use of Social Media 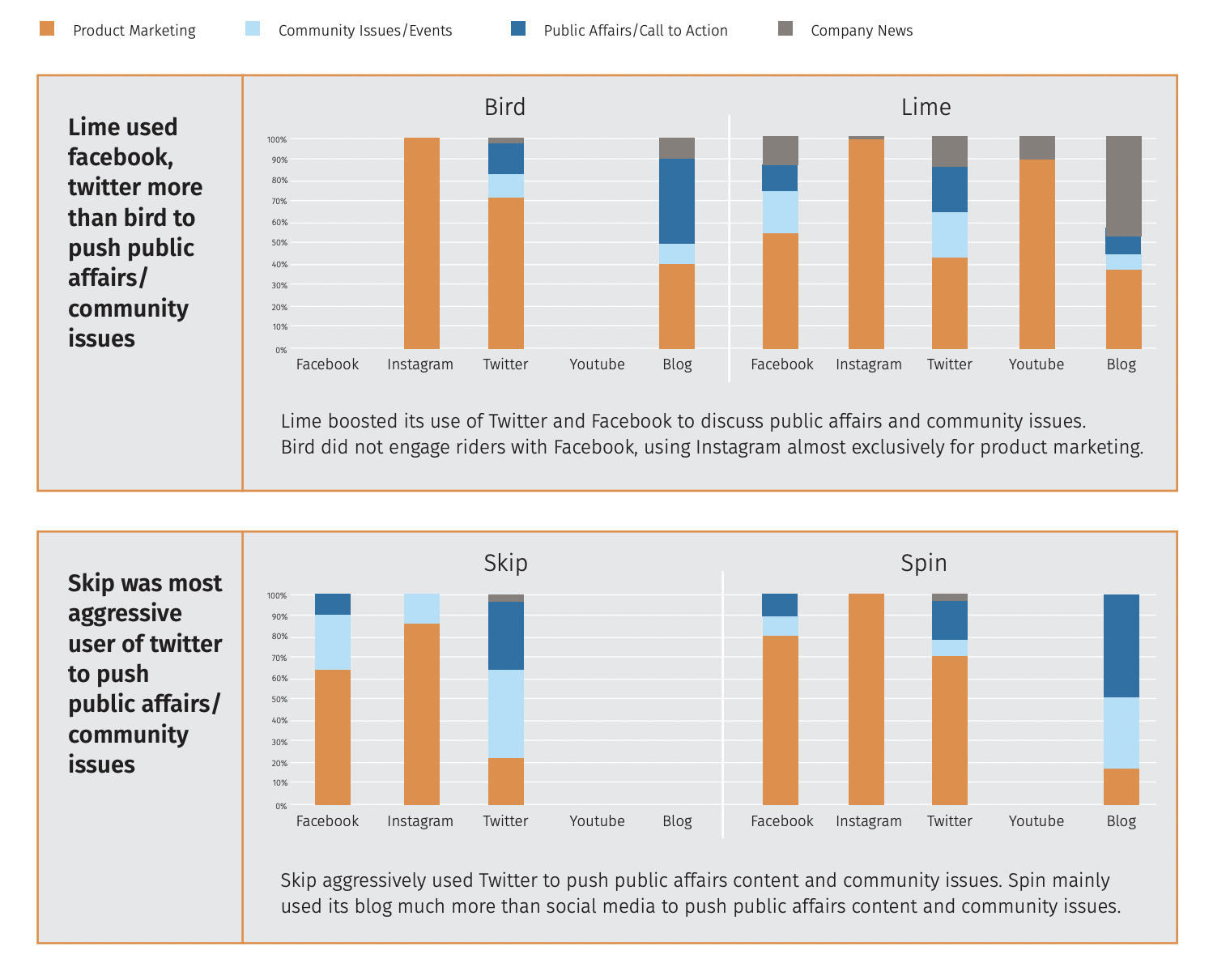 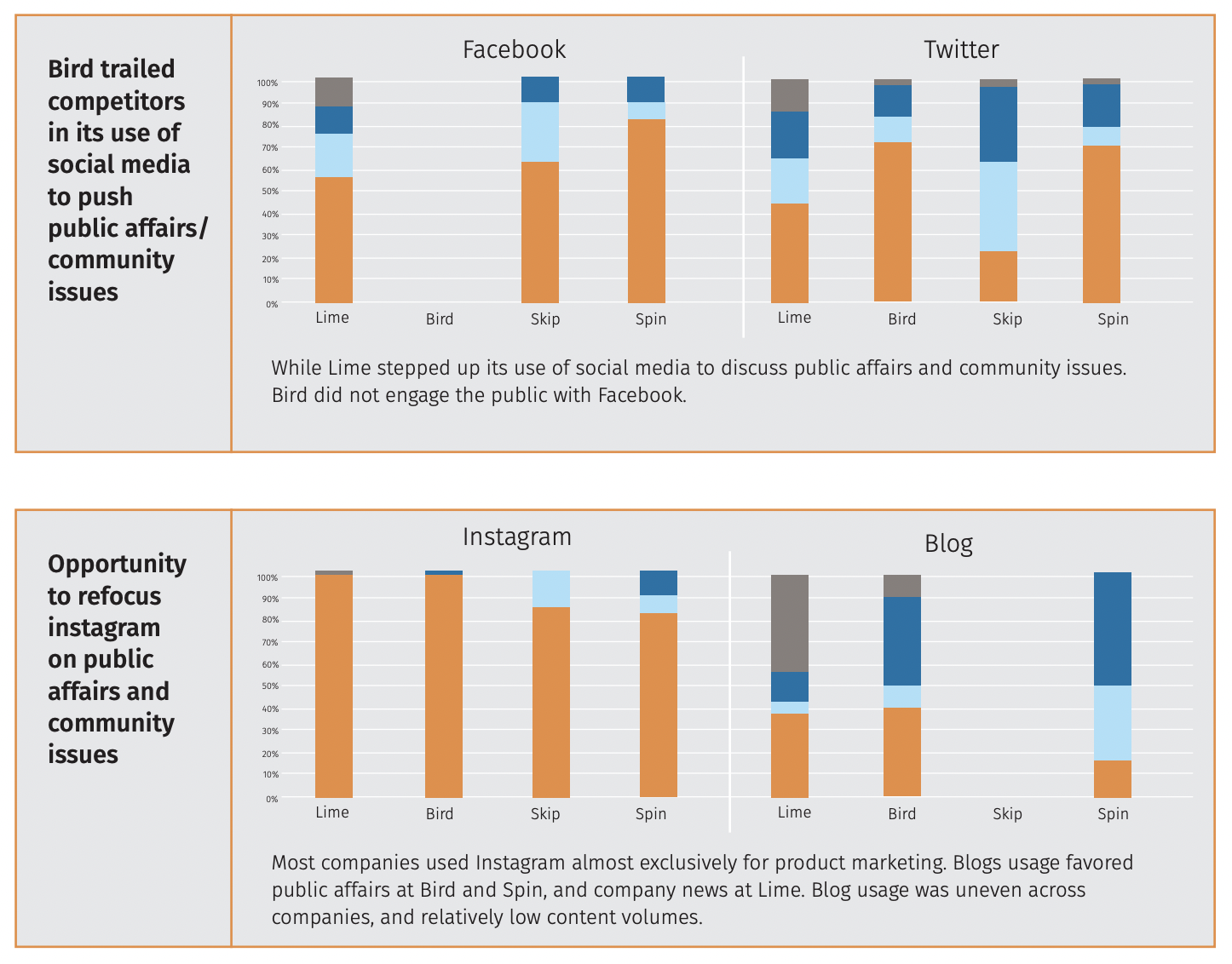 Lack of Public Affairs Operations in the Micromobility Industry

There might be solid business reasons for the marketing emphasis, even in the face of the sector’s explosive growth before the pandemic. However, the lack of focus on public affairs is a drag on building relationships with local regulators—even more so because many markets are effectively duopolies, with the competing micromobility companies offering similar products. From the outside, it seems that gaining and maintaining permission to operate, not growing market share, should be the first priority for micromobility companies.

During our initial interviews with public affairs management and staff, there was a consensus that emerged: micromobility companies’ public affairs operations needed more of a campaign-like approach, a key part of which is coalition building to create third-party validation.

We reviewed the set of new coalitions that have been started to help the sector. Together they make for a promising start, but they are nascent and do not call on riders to take action on pending policy decisions. 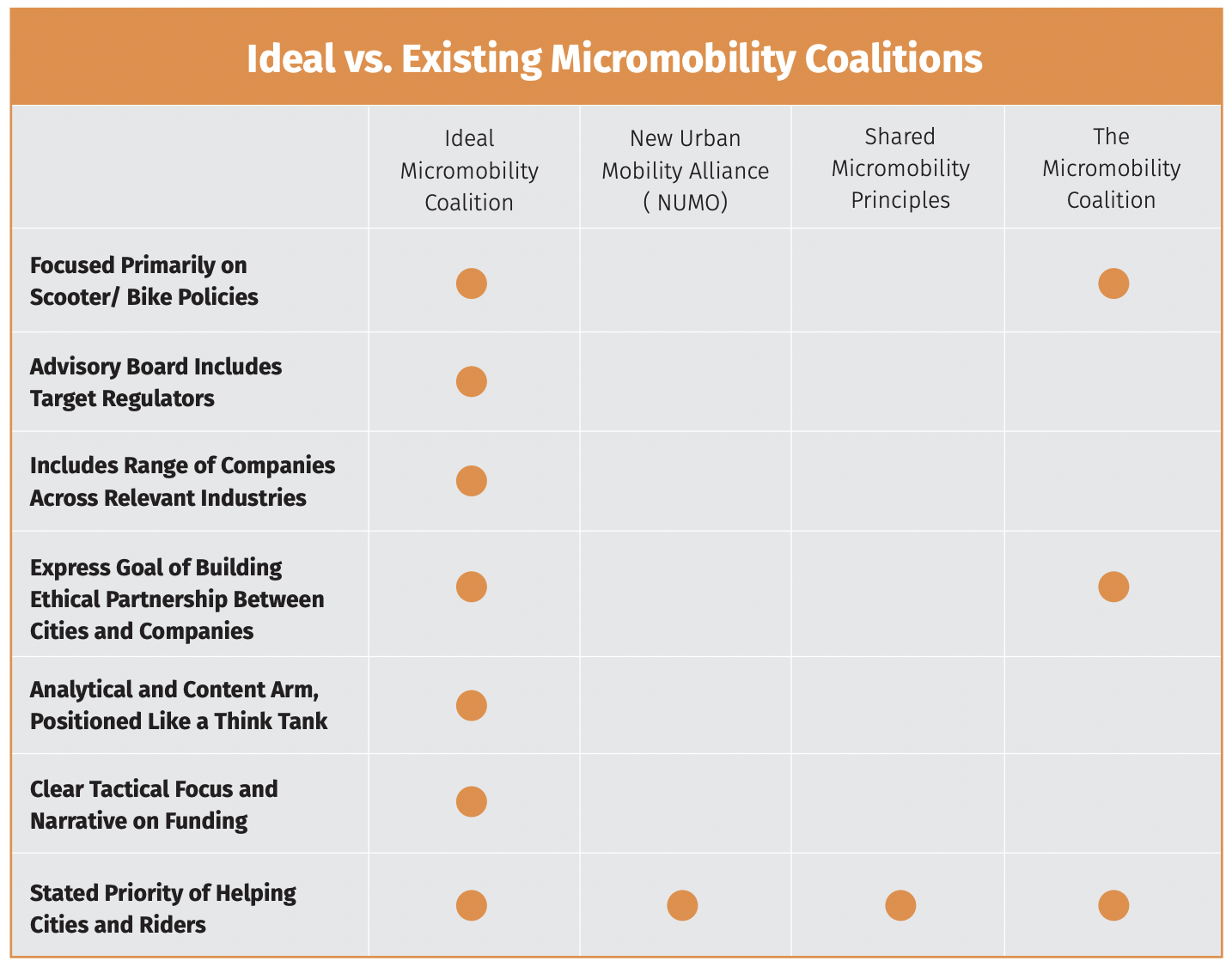 In the decade we’ve spent supporting other disruptive clean economy sectors, we’ve experienced firsthand the challenges faced by onshore (land-based) wind, solar, PACE, home sharing, and cannabis companies. Most of these sectors grew at the expense of powerful incumbents who could engineer pushback. Some, such as cannabis, did not.

However, all of them took a series of steps that roughly overlap, forming a pattern that we’ve called the “Clean Economy Mistake Path.” The Mistake Path captures the three stages of problems created by not building public affairs into business plans — at scale, and right from the start. We contend this pattern has become the “new normal” for clean economy sectors with local regulatory exposure. 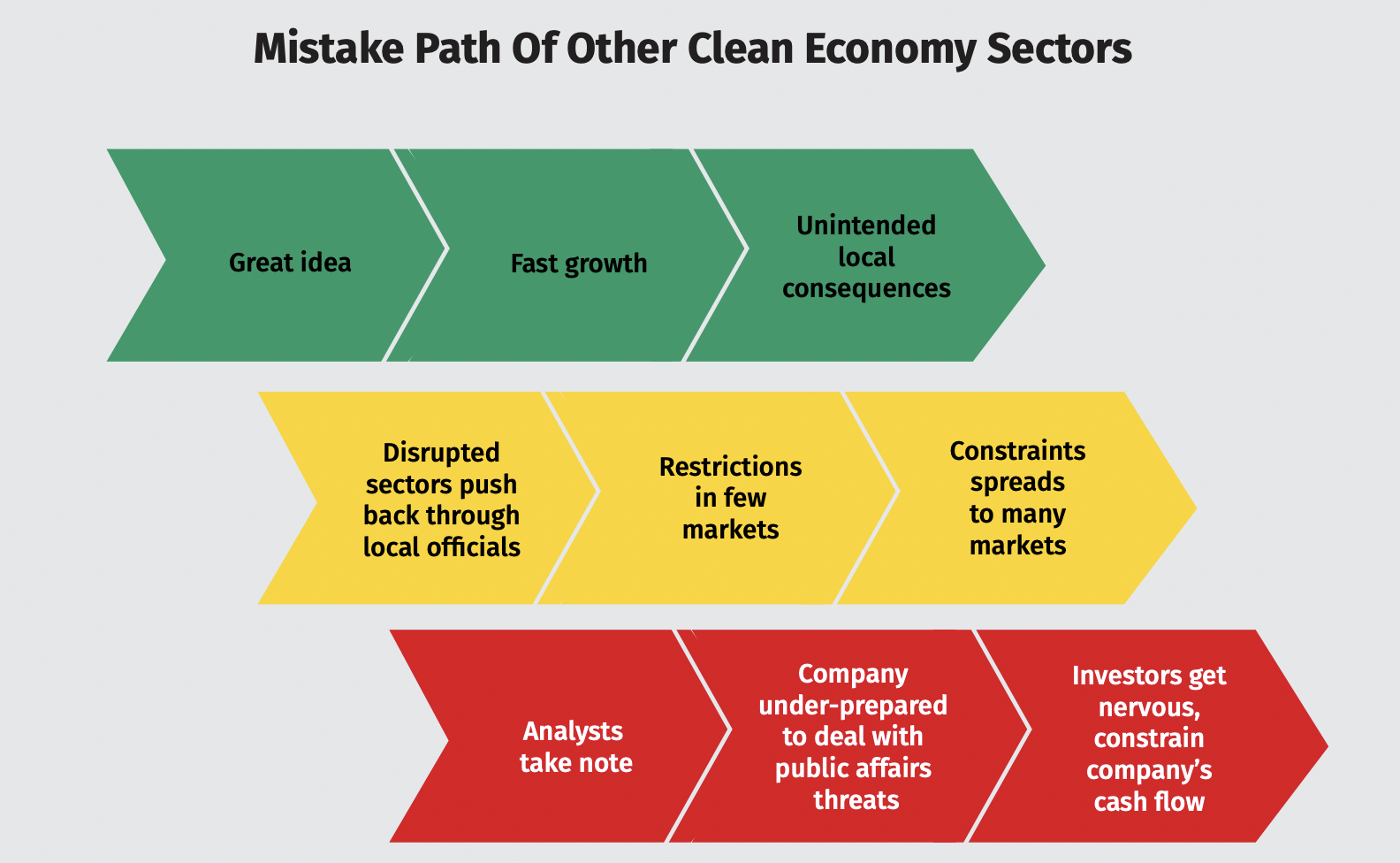 How to Create Opportunities in the Micromobility Industry

The Mistake Path’s lessons are available, and ignoring them can be costly.

MM is different from other sectors in some very important ways. These differences have to be accounted for as micromobility companies adapt the lessons of the Clean Economy Mistake Path.

The Tigercomm team rode several companies’ scooters last year in San Francisco, DC, Boston, and Denver. None asked us to take action to support continued ridership. In fact, for those of us who remain frequent micromobility riders, none of us has ever been asked to a MM public affairs activities. Although, it should be noted that Bird’s and Lime’s programs are advancing quickly enough that our assertion might be outdated when you read this.

However, it’s unclear that any micromobility company is currently segmenting rider data to custom communicate with key rider cohorts. In our view, this is where MM’s opportunity era begins:

The Future of the Micromobility Industry

We recognize that the pandemic has hit the micromobility industry hard, and no one can say how quickly ridership will climb to pre-pandemic levels. But the urgency of global climate disruption has only grown in the last several months – and with it, the criticality of scaling micromobility options for city and suburban residents.

The pandemic has created the opportunity for clean economy sectors to work with policymakers to shift to a sustainable economy. If each sector learns from and adapts to hard-won collective lessons, we can accelerate change. This book is dedicated to micromobility executive teams and public affairs leaders who now grip the handlebar.