Public Affairs is Vital Part of the Cleantech Marketplace

By Mike Casey, President of Tigercomm 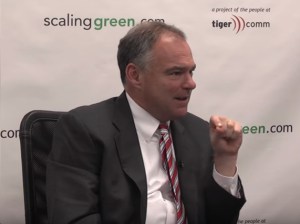 Why? As a mission-driven firm focused on driving the success of the clean economy, we’ve long felt the most important communications case is made by companies in the marketplace – disruptors directly competing (and winning) against the disrupted incumbents.

But, for most clean economy sectors, especially energy, public affairs matters. From the phony Solyndra “scandal" to fights over net metering and approval of wind projects, the refuge of the sluggish status-quo industries is to get politicians to cover their commercial rear ends when something better comes around for customers.

To win, clean economy companies need to over-invest not only in smart marketing communications but also in adroit public affairs. Cleantech companies can’t rely on sky-high public approvals ratings for solar energy, Tesla and organic foods if they want to win in the marketplace. That is because much of the $9 billion a year that gets spent by major corporations on lobbying is to make the market less merit-driven and more incumbent friendly.

Take the 2010 Virginia Clean Economy Forum we organized and hosted for then-former Governor Tim Kaine. At the time, the Governor was running for the U.S. Senate in a state that had a tiny clean economy sector. With an economy long-based on government, tobacco and the military, Virginia had been a traditionally well-run, business-friendly state that didn’t have a “throw the bums out” sentiment when it came to politicians in Richmond. There wasn’t as strong a drive to remake the state’s economy, based on cleantech, as there was and is in Rust Belt states such as Ohio and Michigan.

Back in 2010, you could fit practically the entire Virginia cleantech sector leadership in a meeting room, which is basically what we did. Our message to the Governor: We own businesses in this state, but we have to go elsewhere to do our business.

Since this event, the now-Senator Tim Kaine has volunteered to me on three occasions how much it got him thinking about the potential for clean economy companies. (Disclosure 1 – the Governor was a client of ours in 2007).

His leadership helped set the environment in which a cleantech businessman – Terry McAuliffe – won the governor’s mansion in 2013. (Disclosure 2 – We wrote and executed the outside SuperPAC effort for clean/green philanthropist Tom Steyer on now-Governor McAuliffe’s behalf).

Clearly that one small summit in October 2010 didn’t make all this change happen. But it at least helped create a path walked by a man who could be the next vice president. And his leadership began changing the status-quo environment, allowing an avowed pro-cleantech supporter to become the governor who is writing a major state’s Clean Power Plan implementation strategy.

The point is that for cleantech to win in the marketplace, it has to have both smart and targeted marketing communications with public affairs as the critical second piece - not an afterthought.