First-Ever Look at Social Media in the Wind Industry 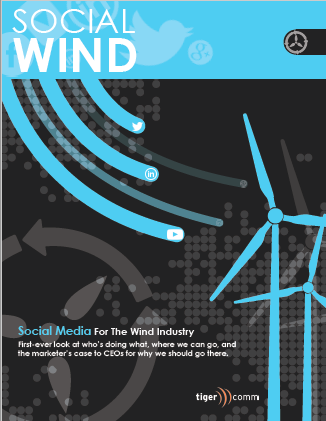 This study comes in the form of our new e-book, Social Wind: Who’s Doing What, Where We Can Go And The Marketer’s Case To CEOs For Why We Should Go There. It's the first effort to look specifically at the wind industry's use of social media.

Based on our review of 14 companies and the six major channels used by them, we found:

In Social Wind, we explore best practices in social media, how top wind companies are using the top social media platforms and what more they can do to fully leverage its power.

As we work in social media, we see that most of the conversation around best practices is based on B2C companies, particularly those with point-of-purchase websites. There's much less discussion for B2B companies, especially those selling large, expensive industrial equipment. With its disruptor status and broad popularity, we think the wind industry has a unique set of needs for social engagement to reach customers, investors and policy makers.

We want to engage wind industry communicators and marketers about how the industry should use social media – and digital media, more broadly – to drive industry sales and success. We’re already preparing to begin Digital Wind, the next e-book in this series. Let us know what you think. Your feedback will be critical to making it a useful offering.