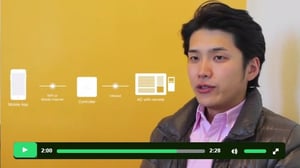 We recently had a chance to speak with Haruumi Shiode, founder and CEO of a startup called Nature, Inc. This company’s focus is on improving residential demand management, and specifically through the use of smart controls for window-mounted or through-wall air conditioners. These types of A/C units are very common in parts of the United States like the northeast, where 58% of households with air conditioning have them. According to Shiode, Nature’s goal is to make it easy for people to save energy – and money – by allowing them to control their room air conditioners remotely.

Today, Nature announced its new product, “Nature Remo,” which is a “smart A/C controller that transforms any window-mounted or through-wall air conditioner into a smart air conditioner.” According to the company’s press release, this is an “Internet of Things” (IoT) product “equipped with infrared, power control and sensors that, along with a mobile app, enable users to control their room A/Cs from anywhere.” Nature’s technology can even “detect the presence of humans and animals in the room.” In addition, Nature announced the launch of a Kickstarter campaign to introduce the product to residential markets.

Nature’s value proposition is based on some compelling statistics about A/C use in the United States. According to the U.S. Department of Energy (DOE), about 5% of all the electricity produced in the United States powers A/C units, costing homeowners more than $11 billion a year. This, in turn, results in approximately 100 million tons of carbon pollution emitted into the atmosphere each year, according to DOE.

It will be interesting to see how this company does in the coming months, both as an interesting energy demand management technology, and also as a case study of a cleantech startup. We’ll definitely be keeping an eye on it. With that, here’s our conversation with Nature founder and CEO Haruumi Shiode, edited for clarity and length.

Scaling Green (SG): How did you get interested in energy efficiency, and specifically the idea for this business?

Haruumi Shiode (HS): My father was an entrepreneur in Japan, and he was so excited about running his company. At the age of 10, seeing how excited he was, I decided that I was not going to work for anyone, that I was going to start my own company in the future. I studied coding and computer science in Japan, as an exchange student at the University of Wisconsin-Madison, and in Sweden. After that, I took a 1,000-mile sailing trip with my father, and one night alone on the deck, there was a full moon in the sky which seemed to be moving with the wind, and I had an uplifting feeling. I concluded that human beings have the ultimate desire to coexist with nature, but at the same time our society is moving further away from our instinct, so I decided to name my company “Nature,” and to bring them closer, using the power of business and technology.

This feeling was reinforced after the Fukushima nuclear disaster in March 2011, when I was working for Mitsui. The day after, I flew to Indonesia to visit a coal mine and construction site for a coal-fired power plant, and I was struck by the massive machines that don’t only destroy nature but also endanger human life. I started to wonder, is this really the right way to generate power, and my conclusion was clearly “no.” As I was in a hotel in Indonesia watching the TV news about the Fukushima nuclear accident, I decided to dedicate my life to promote smaller-scale, distributed, safer clean energy.

Since then, I’ve been looking for an opportunity to leverage my experience, and I settled on the idea of energy efficiency, since that’s the cleanest source of energy. It’s also something where I can leverage my computer science background. I came to Harvard Business School specifically in order to start my company and make it global. I came across the idea of connecting room air conditioners to the internet in order to use this for demand management. Utility companies in Japan and the northeastern U.S. were both interested in the idea. Since then, I’ve been promoting the business, working on a prototype, and planning to ship a product this summer.

SG: What other companies are in the same space as your company?

SG: What is Nature’s competitive advantage compared to other companies in this space?

HS: First of all, our universal solution for room A/C is the best solution to connect room A/Cs to the Internet. Although we offer the solution only for A/Cs with remote controller in the beginning, we will launch power plug unit to extend our reach to the A/Cs without remote in this year. Secondly, I think one of the mistakes I have seen is setting the price too high. Our price point at Kickstarter will be $69 per unit.

SG: Have you attracted any venture capital funding for your company or are you trying to?

HS: Yes, venture capital is interested in what we’re doing, but they want to see attraction from the customer before they invest. That’s why we first want to demonstrate a healthy level of customer demand for our product, and why we are launching the Kickstarter campaign.

SG: What are you planning to do in terms of marketing your company?

HS: Right now, since we don’t have inventory yet, we are focused on the Kickstarter campaign, also on speaking with media people to write up our story. We want to explore business-to-business channels as well, for instance hotels with many air conditioners or a company that owns a bunch of apartments.

SG: How important is state-level demand response policy to your business?

HS: Our product can be enjoyed by anyone. For demand management, the power market needs to be deregulated, or the utility doesn’t have much incentive to procure demand management resources. We are targeting markets where the power market has been deregulated and demand response already exists. So, the big market is obviously New York City – there are 6 million room air conditioners installed – 10% of the entire United States - in New York City alone.

SG: How long would it take a customer to earn back their investment in your product? Are you going to emphasize cost savings in your marketing or some other benefits, like environmental?

HS: Obviously, it depends on the base case for the customer, but somewhere between one and three years. Our device can be used for any infrared-capable appliance. We plan to emphasize the convenience and attractiveness of the product, because I don’t really think people care so much about saving $30 or $40 in a year. I definitely want to emphasize environmental aspects, but I don’t think that’s necessarily the best selling point for the company. Think of Tesla, the main selling point is the car itself, which is really attractive.

SG: Finally, what would you say your company’s main strengths, weaknesses, opportunities and threats (“SWOT”) are?

HS: Strengths – speed and ability to offer a customer centric yet price competitive product. Weakness – we are small startup, only two people working on the company, and have limited resources in general. Opportunities - the cost of the hardware device coming down, big opportunities for demand management, the huge number of room air conditioners. Threats – competitors, but they are not focusing exactly on what we’re doing, and we are focused on this 24/7.