Isn’t it Time Fossil Fuels “Stood on Their Own Two Feet?” 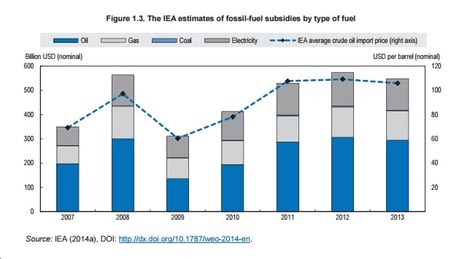 I got sick and tired a long time ago of hearing from the fossil fuel lobby about how clean energy sources need to give up smart policy support and “stand on their own two feet” in the marketplace. To hear them tell it, smart policies that support clean energy are a waste of tax money. The underlining theme is that you’re not “legit” if you get any support from the government.

So, I’ve been wondering lately: what does the “stand on your own two feet” crowd have to say about the latest documentation of fossil fuels’ century-long support from taxpayers?

Well, next to nothing, it seems. In fact, watching them squirm on this subject any time it comes up is cognitive dissonance on display. These self-styled, conservative, “free-market” advocates can’t bring themselves to face the real-world reality that highly profitable, mature forms of energy have been on the public dole for decades, even a century or more.

Scott Nyquist’s recent (and encouraging) post about why an oil guy is bullish on solar is a case in point. Mr. Nyquist touches on the oil companies' taxpayer support (which is massive), but then declares, “In principle, solar cannot perpetually depend on the government’s helping hand; it needs to make its case in the market, which it is beginning to do.”

Wait. Isn’t it more important to insist – as an oil guy – that it’s embarrassing that the most powerful and profitable industry on earth can't seem to get itself off corporate welfare – like, right now?

There’s a derogatory term for able-bodied people who stay on welfare for a long time and don’t need it: the stereotypical “welfare bum.” However, in the case of fossil fuels, the term fits like a glove.

The recent OECD’s Inventory of Support Measures for Fossil Fuels 2015 documents the extent to which fossil fuel companies sit on the corporate welfare rolls. If you want to know how taxpayers’ money around the world gets wasted, you could do a lot worse than starting here. Data from the inventory don’t just document this outrageous waste of taxpayer money the world over, but lay bares the sheer stupidity of underwriting the destructive industries:

We contacted Earth Track founder Doug Koplow, one of the world's leading experts on counting up the wide array of corporate welfare doled out to the fossil fuel industry, for his thoughts on the OECD 's new report. According to Koplow, this new study represents "an important and integral part of the move towards transparency in fossil fuel subsidy reporting around the world." Koplow is pleased that the OECD looked not only at national subsidies for fossil fuels, but also at  "state and provincial government support as well where data were available." Finally, Koplow makes an important point, noting that even as thorough as the latest OECD inventory is, it still "captures primarily tax expenditures and direct government support," and not all of the vast array of taxpayer-funded corporate welfare flowing to the fossil fuel industry.  Which is why Koplow says that, "For the 2017 update, my hope would be that government subsidies via credit markets, indemnification, and preferential market rules (e.g., dispatch order that puts coal plants first) would also be captured."

We'd also note that the OECD report doesn't even attempt to capture the massive health, environmental and other negative impacts ("externalities") of fossil fuels that are not incorporated in the price of those fuels. Those "externalities" essentially allow the fossil fuel industry to dump its pollution into the air and water legally and for free, to boot.  Add in those costs to the price of fossil fuels, and they quickly become non-competitive with clean, renewable energy.

By the way, a recent study demolished, yet again, the fossil fuel lobby’s talking point that we need to burn more fossil fuels - and pollute more - in order to have a rapidly growing economy. Instead, the study found, "From 2004 to 2014, OECD countries grew their economies by 16% all together, while cutting fossil fuel consumption by 6% and reducing greenhouse gas emissions by 6.4%, according to the report."

In turn, cutting off subsidies - which make fossil fuels artificially cheap and tilt the economic playing field heavily in their favor - will almost certainly help the economy, while simultaneously spurring a more rapid transition to clean energy that allows us to avoid the worst impacts of climate change.

We'll end on a positive note.  According to the OECD, "Compared with the previous edition released in January 2013...total support for fossil fuels in OECD countries clearly exhibits a downward trend." That's good, and we hope that trend accelerates, until we hit zero subsidies for highly mature and profitable fossil fuel sectors as rapidly as possible.