Communication is Key to Build a Movement to Save the World

Q: "Why doesn't ocean acidification get the same attention as climate change?"

A: "Too many syllables. It's not a good hashtag."

This was the tongue-in-cheek answer to a serious question that I found myself giving, as a panelist in front of a crowd of 200 people at Cross Campus in Santa Monica, California.

The answer may have been cheeky, but there is some real logic to it. In the modern age when some of the most effective organizing and advocacy takes place online, hashtags are the forums where supporters gather and ideas can take root.

To generate attention for a topic of social or environmental consequence, and motivate people to care and take action, you first need to present the information in a place where it is easy to find, preferably in a place where your target audience is already active.

Additionally, the content must be relevant, informative and attractive. The goal is not only to reach the target audience with an impression, but to engage them in a way that inspires conversation and feedback. With the simple act of responding to your message, your audience will:

This is how a "campaign" becomes a movement, something that has tremendous political power. See: #ArabSpring, #BlackLivesMatter, and #ActOnClimate. 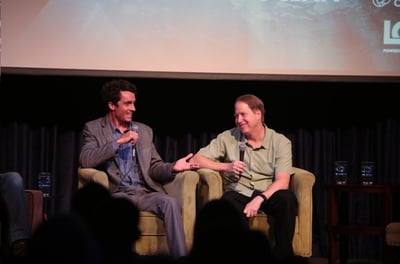 If I felt like the ugly duckling of this panel, it's because I was. My fellow panelists were far more knowledgeable and experienced than me:

I knew my role, and it was not to try to out-science these guys on oceanographic chemistry. I was invited to participate in the conversation as an Executive Committee Member for the West Los Angeles/Malibu Chapter of the Surfrider Foundation, which is a volunteer network committed to the protection and enjoyment of the oceans, waves and beaches. I went into the event knowing that I had to bring a message of empowerment and inspiration to act; otherwise, the topic would be just too depressing. I ended up drawing on my day job as a digital content producer at Tigercomm.

I joined Tigercomm because I am convinced that fighting to decarbonize the economy is my generation's greatest challenge, and I am dedicated to working towards the solution. To fulfill that purpose we bring cutting edge digital strategy, in tandem with solid traditional earned media experience, to put a laser focus on:

Ocean acidification, like climate change, is caused by atmospheric carbon dioxide. It is a problem which will have enormous economic and ecological consequences in the immediate future. There is a real case to be made that acidification should be worked into the advocacy messaging as one of the more pernicious effects of carbon pollution. As a primary source of both oxygen (70-80%) and protein (14-16%) to humanity, a healthy and living ocean is every bit as critical as a stable climate. When we advocate for policies like the Clean Power Plan, and talk about the threat of the status quo, talking about the acidification of the world's oceans can add a real sense of urgency to the debate.

The solution is clear: we need to decarbonize the global economy. The technologies to do it in the energy and transportation sectors are ready, and they are rapidly scaling up. Unfortunately, fossil fuel industrialists are actively doing everything they can to block this progress that disrupts their parasitic business model. These obstructionists are all that stand between us and a clean energy future, and it will take a movement to overcome them.