My Search for the Incredible Disappearing Fuel Cell: Part 2 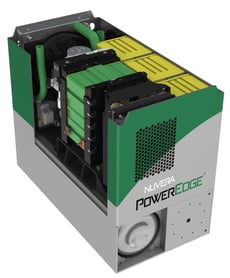 In my last post, I wrote about what I learned at the Fuel Cell Seminar & Expo about the potential of the industry. To offer a balanced perspective, today I’ll lay out the challenges facing the industry and how marketing communications can be used to overcome those challenges.

The primary challenge identified by several of the people I talked with is increasing awareness. UTC Power’s Jennifer Sanger noted that it’s tough to get excited about a big gray box, especially compared to more visually compelling clean energy sources like wind turbines or solar panels. Gus Block of Nuvera added, “We need to demystify.”

I imagine this stems from gun shyness over the industry’s initial inability to live up to its hype. However, if the industry is serious about scaling itself up, it needs a proactive communications strategy that engages customers with its value proposition and with policy makers to ensure that it does not get left out in the cold.

Ballard’s Guy McAree also noted the challenge of displacing current technologies because people are comfortable with what they have now. For example, customers are used to backup power with batteries and diesel generators. It’s incumbent upon the industry to make the case for why it’s a better choice. In a larger sense, all renewable technologies are having a tough time displacing fossil fuels because our country has been run on them for the past century. And those traditional industries don’t want to get pushed aside by newer, cleaner technologies without a fight.

Another key challenge is building a hydrogen infrastructure. It’s a chicken-egg dilemma. No one wants to build hydrogen fueling stations if they’re not assured of demand. Conversely, no one wants to invest in fuel cell vehicles if there are no fueling stations. The South Carolina Hydrogen & Fuel Cell Alliance and California Fuel Cell Partnership are helping to expand the infrastructure in their respective states. However, to achieve hydrogen infrastructure at a national scale, the industry needs to be proactive about helping to create that market demand.

On top of this is the inherent challenge of harnessing hydrogen. While it may be the most abundant element in the universe, it is not readily available in a usable form. Therefore, most hydrogen is generated either through electrolysis of water or by fossil fuel reforming. Some question whether these energy intensive means are harmful to the environment. Fuel cell proponents argue that the reduced particulate matter and carbon emissions of the end use more than offset the emissions profile of manufacturing hydrogen.

Finally, there is the cost challenge. Most fuel cell technologies use precious metals that are inherently expensive. However, eliminating the billions in government subsidies that are handed to fossil fuels and putting a price on their harmful emissions could easily close the price gap.

These challenges do not stand in the way of the opportunities for the fuel cell industry.

Nuvera’s Block has been working with fuel cells since 1996 and I think he summed up the opportunity quite well: “We have a window of opportunity with natural gas as a transition fuel to renewable energy. It’s an opportunity to use an abundant resource to kickstart a cleaner energy source without taking our eye off the ball of the renewable energy end goal.”

Most of us agree that an energy mix that is clean, abundant and domestic is the end goal. But that end goal is farther off than many would like to admit. It’s not realistic to “rip off the bandage” and stop using fossil fuels today. What we can do is develop a plan with aggressive yet achievable targets that uses commercially available technologies, like fuel cells, to move us closer to that end goal.

There are three ways the fuel cell industry can help itself and help to achieve that goal:

1. As an industry, develop a unified message that conveys to policymakers and customers that fuel cells work as a clean, domestic energy source. In a market dominated by entrenched and deep-pocketed fossil fuel interests, a rising tide lifts all boats.

2. Demystify fuel cells. It’s an elegant technology with great flexibility to meet a multitude of our power needs. For example, UTC Power created a powerful infographic about the uses for fuel cells.

3. Raise the volume and frequency on how commercial fuel cell technologies are a viable part of the energy mix via more aggressive media outreach, interesting blog posts and other compelling online and digital content.

Note: Since the Fuel Cell Seminar & Expo, UTC Power was acquired by ClearEdge Power as part of UTC’s restructuring efforts to focus on its core aerospace and building businesses.