Why Does Southwest Airlines Junk Its Brand? [UPDATED] 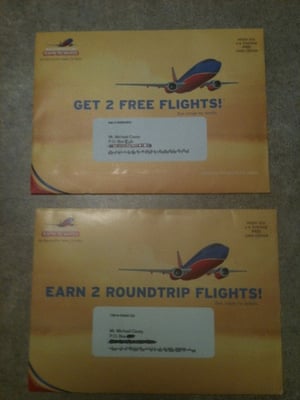 I’ve been a fan of Southwest Airlines for years. It’s not luxury, but it usually gets you there with a passenger-friendly, problem-solving approach to customers’ needs. But here’s a standout exception that suggests that even Southwest can be careless with its brand: Just try to get them to stop sending you junk mail.

For more than 18 months, I (really me plus my awesome executive assistant) have been calling Southwest Airlines to ask them to stop sending me junk mail solicitations of various sorts, particularly credit card offers. The odyssey required to get off a mailing list is emblematic of how far you have to go to just reduced the waste that’s shoveled at you. The default is against –- really against -- those who want to opt out of wasting stuff.

Over these many months, all calls to Southwest have been answered with helpful promises to stop the solicitations. They haven’t. After two more credit card offers  arrived in my P.O. Box last month, I called the reservation desk –- again –- and explained my past efforts and growing irritation. Call customer relations in Dallas, I was told (214-932-0333).

The customer relations representative who answered first insisted on getting my frequent flyer number (It wasn’t handy – I was calling from train to work.), but she eventually found me. I’m already on the no-mail list, she said. Why the credit card solicitations, I asked? We “aren’t sending them – it’s the credit card company,” she said.

Why is the passenger-friendly airline handing permission to a credit card company to irritate passengers? “It’s got your logo and colors on it,” I said.

“There’s nothing we can do about it,” I was told. “You’ll have to call Chase Visa.”

I said I’d do it, but I requested that she identify and talk to a person with some authority at Southwest over these brand-control decisions. Shouldn’t the airline make it easier for customers to get off annoying junk mail lists that are used to distribute materials carrying its logo? She demurred by saying she’d put a note in my file. I pressed further, and was told my concerns would go in the “log,” a “monthly summary seen by other leaders at the company.”

On to Chase Visa. The first call to the number I was given (800-792-0001) put my assistant into an endless voice mail loop. She finally found out it was the wrong number. The correct number (866-436-4335) had its own voice mail maze, but it was eventually answered by someone who insisted that I was only on the list because I’d asked to be on it (really?), and that only I could call to get off the list.

Why’s that? Because it’s such an honor to get Chase Visa’s Southwest-logoed junk mail?

This is obviously dumb on several levels.

I still get Southwest-branded junk mail, even though I’ve signed up for the 41pounds.org program, as well as the Direct Marketing Association’s “Mail Preference Service,” now called “DMAchoice.” Both are opt-in programs to opt out of junk mail. As an individual consumer, it’s dumb to make me jump through hoops to get off the Southwest-Chase junk mail list.

For Southwest as a company, it’s dumb for an airline that brands itself as a down-to-earth, problem-solving company to hand brand control over to the annoying practices of Chase Visa.

For a country in recession, it’s dumb not to be cutting waste and promoting efficiency. Why make it hard for people not to waste stuff? And, why not start with the obviously dumb stuff, like junk mail being an opt-in proposition, or hiding recycling bins in the corners of malls and airports far from trash cans? Or why not have wait staff at restaurants ask people if they want a throwaway straw before just inserting one in every drink? (I now get about a 40% success rate when I ask that they leave it out.) Or, how about not leaving retail shop doors open on the hottest days of the year?

No doubt, it’s an ocean of avoidable wasteful practices out there. They’re so common, that trying to change it can seem hopeless. What else can you do? Confucius once said, “Better to light one candle than to curse the darkness.”

UPDATE 9/26: I spoke with Chase Visa today and they have removed me from their mailing list. To their credit, they saw the blog post before I could even call them to let them know about it.