Senator Byrd: His Legacy vs. His Vision

Senator Robert Byrd passed away early this morning, just days after a study showing that coal is a money loser for his home state of West Virginia.

The interests of the coal industry and the senator were intertwined for nearly all of Byrd’s 51 years in the Senate. He saw the heyday of coal production and cheap fuel; the mechanization of mining, and with it, the birth of mountain top removal. In 2009, as detailed in the report by West Virginia Center on Budget and Policy (WVCBP) and consulting firm Downstream Strategies, the coal industry accounted for “nine percent of state employment.”

Along with these jobs, coal also brought a terrible cost to West Virginia – polluted waterways, health and safety threats, and the rise of the likes of Don Blankenship.

In a bitter irony, the state’s roads, which were the biggest infrastructure success for the Senator (who once vowed to be his state’s “billion dollar industry” when he took over the Appropriations Committee), are also a victim of the coal-induced legacy.

“One of the largest "legacy" costs has been highway repairs from trucks that haul coal and destroy West Virginia's roads in the process. The total cost required to fix the damage is $4 billion, according to the report,” writes Stacey Feldman on the blog Solve Climate. 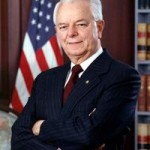 As a renowned lover of poetry and history, one can only imagine that Senator Byrd viewed his coal successes with mixed emotions.

It’s worth noting that in the last few years of his life, Byrd began turning away from unqualified support for the coal industry. In an op-ed published this past December, Byrd wrote that “the time has come to have an open and honest dialogue about coal’s future in West Virginia.”

He continued: “West Virginians can choose to anticipate change and adapt to it, or resist and be overrun by it. One thing is clear.  The time has arrived for the people of the Mountain State to think long and hard about which course they want to choose.”

Senator Byrd’s comments, made months before the BP Gulf Disaster, seem applicable to the entire country, and to all forms of dirty energy. Americans fundamentally get that. They don’t want dirty energy lobbyists running government, or oil disaster clean ups, or even serving as the investment vehicles for corrupt federal judges who then look after them.

Senator Byrd wrote “the time has arrived” for change. He was right.