A recent study by the Lawrence Berkeley National Laboratory (LBNL) has some generally good news for all of us who want to see greatly increased penetration of solar and wind power on the U.S. power grid. However, there are also a few challenges identified by LBNL, mostly related to grid management practices. See below for two graphics from the report, and also see the LBNL presentation, both of which highlight key impacts of higher "VRE" ("variable renewable energy") penetration through 2030. For intsance:

For some excellent coverage of this report, see David Roberts' piece at Vox, which emphasizes that increased solar and wind power penetration is coming, but that there is a "haze of uncertainty" in which "the people who manage US electricity markets and infrastructure, who must make decisions with 20-, 30-, even 50-year consequences, are stuck making high-stakes bets." As Roberts puts it: "things will look different in an electricity system with lots of variable renewable energy (VRE) — different prices, a different shape of demand, different timing, different needs — and if the people managing the electricity system bet on low VRE and get high, they are going to screw up all sorts of things." For instance, Roberts explains that increased VRE will change the shape of daily demand (e.g., the "duck curve"), will make prices "more volatile," and will make "the services that support it [e.g., "things like spinning reserves, frequency and voltage regulation, demand response, and, most notably, storage"] much more valuable."

For its part, Greentech Media (GTM) emphasizes the potential for significant declines in wholesale energy prices - " by as much as $16 per megawatt-hour" - in a high VRE scenario. GTM also notes "the need for more dispatchable resources that can quickly respond to changes in demand or production," as well as "[p]rices for ancillary services increased by up to nine times under the new scenarios."

Finally, check out the study authors' article at The Conversation, which emphasizes "several profound changes in electric power systems" due to high shares of VRE generation:

In particular, our study shows how solar and wind tend to lower energy prices, but they add new complexity for operating the grid, which has big implications for regulators. For consumers, this research is a reminder that making the electricity grid cleaner with wind and solar is an evolving process that requires significant changes to how the power grid is currently run - but one that offers large opportunities, if we as a country can become more flexible when we use electricity.

In sum, a future in which VRE generation - largely wind and solar - grows to a much larger share on the grid, is highly likely and will be overwhelmingly beneficial. However, there will be adjustments that need to be made by grid operators, policymakers, investors and clean energy companies. That's why studies like the one by LBNL are so valuable, and deserve to be paid serious attention. 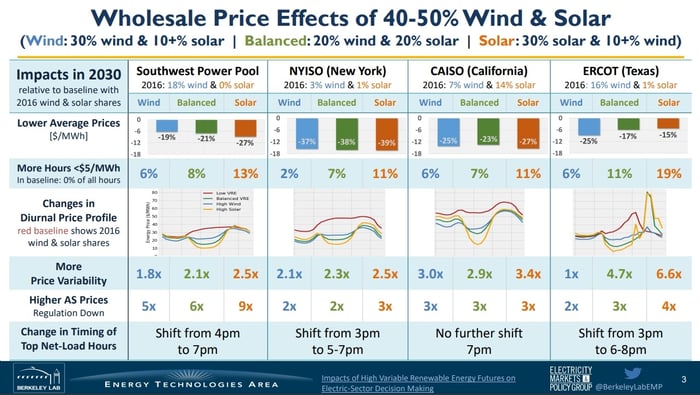 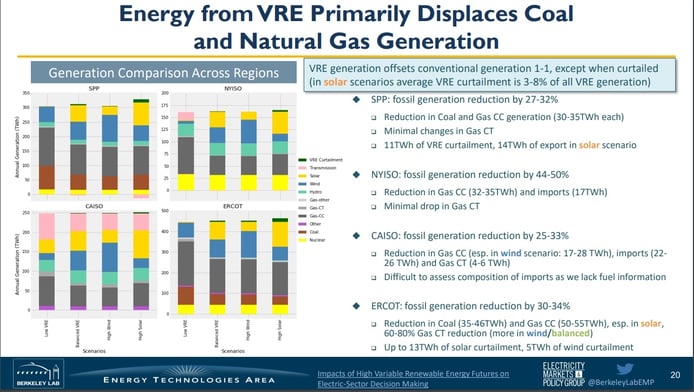