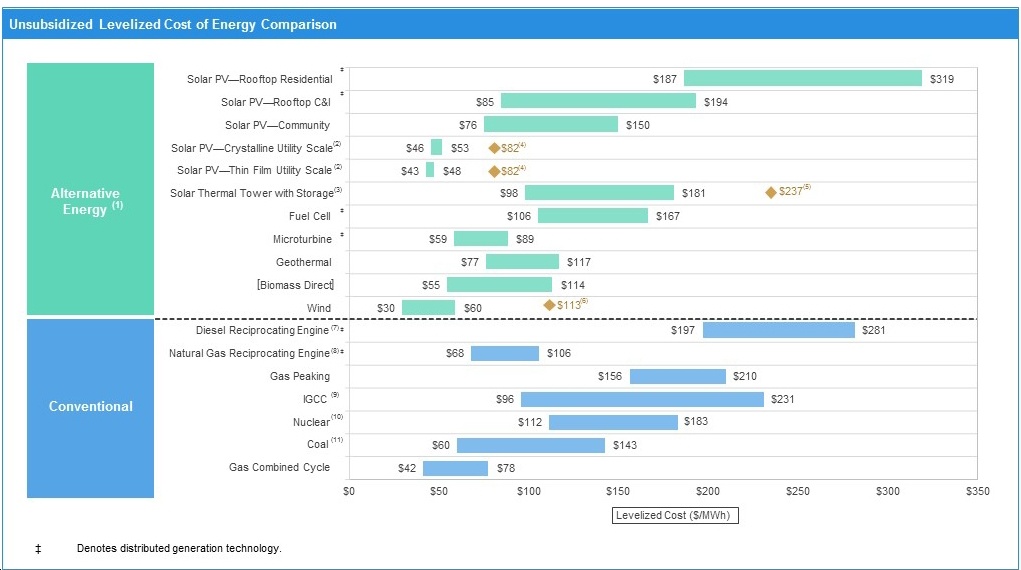 For years, Lazard — one of the world’s leading financial advisory and asset management firms — has been producing reports detailing the “Levelized Cost of Energy” (LCOE) for different power generation technologies. These reports have been invaluable in helping chart the stunning decline in the cost of clean energy over the years. For instance, check out Lazard’s report from 2009, which shows solar PV costing between $131 and $196 per megawatthour (MWh) and wind power between $57 and $113 per MWh. In stark contrast, the 2017 report, released today, shows what Lazard calls the "continued decline in the cost of generating electricity from alternative energy technologies, especially utility-scale solar and wind" (note: also compare to our post last year about Lazard's 2016  LCOE analysis):

All that is why it's no surprise the headline in Bloomberg today is "Renewables Are Starting to Crush Aging U.S. Nukes, Coal Plants."

Building solar and wind farms has started to become a cheaper proposition than running aging coal and nuclear generators in parts of the U.S., according to financial adviser Lazard Ltd.

Take wind: Building and operating a utility-scale farm costs $30 to $60 a megawatt-hour over its lifetime, and that can drop to as low as $14 when factoring in subsidies, according an annual analysis that Lazard’s been performing for a decade. Meanwhile, just keeping an existing coal plant running can cost $26 to $39 and a nuclear one $25 to $32.

Finally, see below for a graph from Lazard showing how sharply the "mean LCOE" for wind (-47%) and solar (-72%) has fallen since 2009. In contrast, nuclear power mean LCOE costs have actually risen by 20% since 2009, while coal-fired power's mean LCEO has remained roughly flat (-8%) and natural gas combined cycle has fallen by 27%.

The result, in Lazard's words, is that "the gap between the costs of certain alternative energy technologies (e.g., utility-scale solar and onshore wind) and conventional generation technologies continues to widen as the cost profiles of such conventional generation remain flat (e.g., coal) and, in certain instances, increase (e.g., nuclear)." And the best news of all, as we noted last year as well, is that clean energy cost declines are almost certain to continue in coming years, given that both wind and solar power are seeing continued technological advances and other cost-cutting measures that show no sign of stopping.