Bloomberg New Energy Finance (BNEF) is out with its Electric Vehicle Outlook 2017, and it's yet another indication regarding cleantech's dizzyingly rapid growth rate. According to BNEF:

“The EV revolution is going to hit the car market even harder and faster than BNEF predicted a year ago. EVs are on track to accelerate to 54% of new car sales by 2040. Tumbling battery prices mean that EVs will have lower lifetime costs, and will be cheaper to buy, than internal combustion engine (ICE) cars in most countries by 2025-29.”

See the two graphics below for a quick overview of where the market for worldwide electric vehicle sales is likely headed, including around 60% of electric vehicles penetration in the U.S. by 2040. Combine that with BNEF's outlook for clean energy growth, and we're looking at the potential for large-scale decarbonization of the vehicle fleet by 2040. Good news for the economy and for the environment.

A few more points from the new BNEF report include: 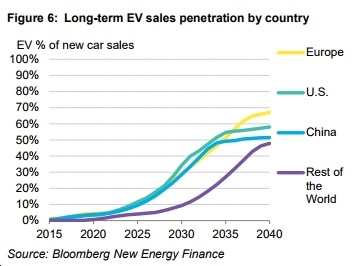