Bloomberg New Energy Finance (BNEF) is out this morning with its New Energy Outlook 2017, and there's a great deal to digest. Mostly, it's great news for clean energy and for cleantech more broadly, as we'll get into below.

Let's compare that forecast to BNEF's new 2040 outlook. In short, BNEF is much more bullish on clean energy than EIA, with BNEF forecasting that "[w]ind and solar account for 48% of installed capacity and 34% of electricity generation world-wide by 2040." Note that BNEF's projected 34% share is for solar and wind only, not for "other renewables," which as you can see from the graph below, are significant. Add those in and you're around 50% for "renewables," compared to EIA's reference case projection of just 29% "renewables" (hydropower and what it calls "other renewables" - wind and solar, mostly) by 2040. 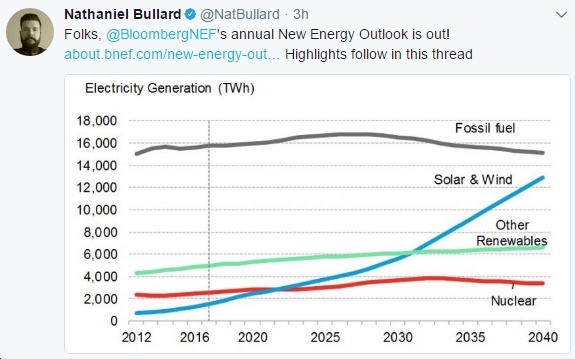 Buttressing the case for an optimistic clean energy - and more broadly cleantech - outlook to 2040, here are a few tweets worth highlighting, courtesy of BNEF analyst Nathaniel Bullard: 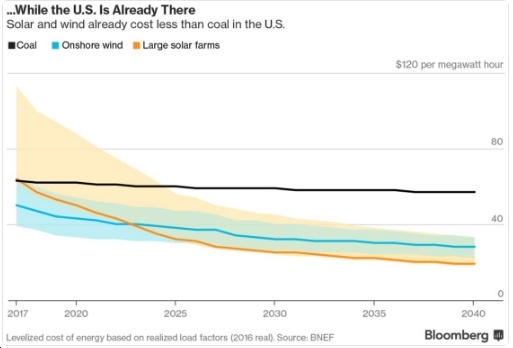 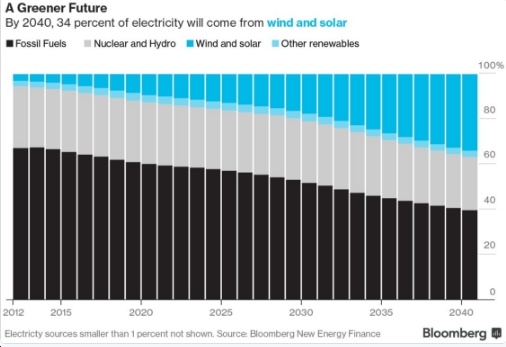 In sum, the future looks extremely bright for clean energy, and for cleantech more broadly. The question isn't whether these sectors will grow rapidly, but simply how rapidly they'll grow. On that, we'd argue that EIA is far too conservative (or pessimistic, if you prefer), while BNEF is quite possibly too conservative as well, although they appear to be much closer to the mark than EIA's typically bearish-on-renewables, bullish-on-fossil-fuels forecasts.