We've previously written about how long-term forecasts of clean energy by the U.S. Energy Information Administration (EIA) have been wildly, almost laughably low.  Now, a new study by Oil Change International and Greenpeace finds the same pattern for oil companies' forecasts of renewable energy, and also for electric vehicles. Here are a few key findings:

The combination of all these severe problems means, as the title of this report indicates, that oil companies are consistently "forecasting failure" for their competitors (clean energy) while forecasting success for themselves. While not particularly surprising, given the oil companies' powerful economic incentives to maintain fossil fuels as a significant share of the world energy mix for as long as possible, it also means that investors and others should take these "forecasts" with a huge grain - or better yet, perhaps, a pillar - of salt. 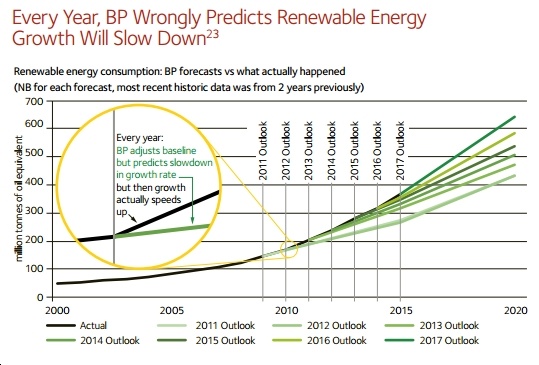