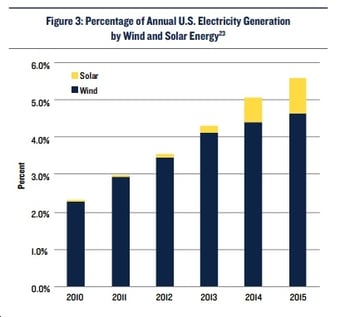 A brand-new report by the Natural Resources Defense Council (NRDC) has good news for anyone concerned that the transition from dirty to clean energy might be derailed in coming years. Instead, according to NRDC (bolding added for emphasis):

The United States is building a clean energy revolution that will deliver deep pollution reductions. Coal-fired generation dropped to historic lows this year, producing only one-third of our electricity, while renewable energy generation reached record highs, with more than one-eighth of America’s electricity generated from solar panels, wind turbines, and other renewable resources. The past year in energy saw a number of victories for the environment, highlighted by a global climate agreement and a carbon pollution reduction plan for the United States. There have been strong efforts to decarbonize the electric grid through carbon reduction targets, energy efficiency gains, and renewable energy additions. In fact, more than one-fifth of the U.S. population lives in a state with a goal of at least 50 percent renewable energy.

As a result of these trends, NRDC argues, "a transition to a clean energy economy is irrevocably underway, and independent of any changes in federal administrations or congressional leadership."  At the same time, NRDC believes, "economic forces, integrated with energy policy made at state and regional levels, will remain the most significant factors in determining America’s energy future, not partisan ideological differences."

A few other important findings in this report include:

We'd further point out that corporate America continues to push ahead with renewable energy, in large part because it makes strong business sense for them to do so. For instance, the New York Times reported yesterday that "[l]ast week, Amazon reiterated its long-term commitment to power its machines entirely with renewable energy," and that  "all of [Google's] data centers around the world will be entirely powered with renewable energy sources sometime next year." Google itself points out that "the cost of wind and solar came down 60 percent and 80 percent [over the past six years]...proving that renewables are increasingly becoming the lowest cost option." Google concludes that its "ultimate goal" is no less than "to create a world where everyone — not just Google — has access to clean energy." Sounds good to us!