For years, Lazard -- one of the world’s leading financial advisory and asset management firms -- has been producing reports detailing the "Levelized Cost of Energy" (LCOE) for different power generation technologies. These reports have been invaluable in helping chart the decline in the cost of clean energy over the years. For instance, check out Lazard's report from 2009, which shows solar PV costing between $131 and $196 per megawatthour (MWh) and wind power between $57 and $113 per MWh. Today's report, in stark contrast, shows the following: 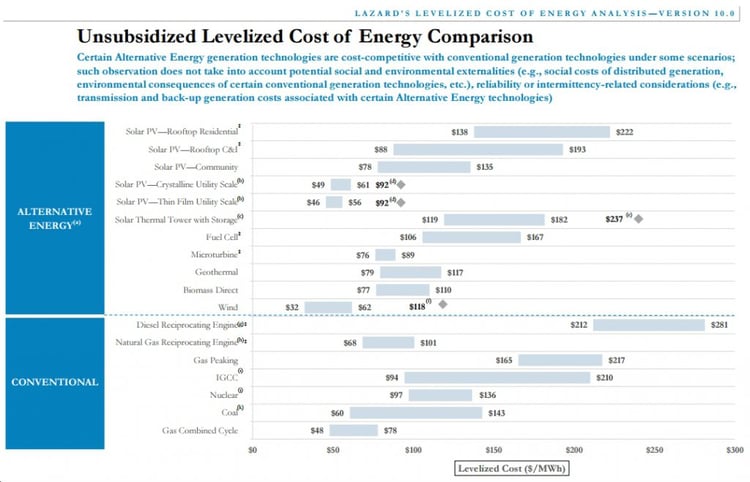 As you can see, utility-scale solar PV is now down to the $46-$61 per MWh range, an enormous decline in just the past 7 years. As for onshore wind power, that's also down sharply, to the $32-$62 per MWh range. Comparing the different power generation technologies on an unsubsidized LCOE basis, Lazard finds that onshore wind power is the cheapest, with utility-scale solar also extremely attractive from a purely economic point of view -- not much different in terms of cost than wind power, and actually slightly less espensive than natural gas combined cycle. For its part, coal is more expensive than any of these, particularly if modern pollution-control equipment is installed. Nuclear power is more than twice as expensive, on an LCOE basis, as solar and wind power. Actually, community solar power now is less expensive than new nuclear power, and on par with new coal-fired power. Finally, rooftop solar at its least expensive ($88 per MWh for commercial and industrial) is cheaper than new nuclear power and also new coal-fired plants with advanced pollution control technologies (e.g., carbon capture).

See below for a graphic from Lazard showing how sharply wind and solar power costs have fallen since 2009. For wind, the cost range is down from $101-$169 per MWh in 2009 to just $32-$62 per MWh in 2016. That's a 66% decline -- and that's huge. For utility-scale solar, the cost has fallen off a cliff, down 85% from 2009 ($323-$394 per MWh) to just $49-$61 per MWh today. As Lazard explains, "wind and solar PV have become increasingly cost-competitive with conventional generation technologies, on an unsubsidized basis, in light of material declines in the pricing of system components...and dramatic improvements in efficiency, among other factors." And the best thing of all is that there is absolutely no reason to think that these costs declines will stop, given that the "fuels" for both wind turbines and solar panels are free and inexhaustible, and also that both wind and solar power are seeing continued technological advances and other cost-cutting measures that show no sign of stopping.

Finally, it's worth noting that offshore wind power costs are also plummeting. For instance, earlier this month:

A consortium made up of Shell, Van Oord, Eneco, and Mitsubishi/DGE have been awarded the concession to build the Borssele III and IV Wind Farms, amounting to 700 megawatts (MW), at a new record low cost of €54.5/MWh.

The race for the lowest offshore wind bids has been fierce this year. DONG Energy was awarded the concession to build the 350 MW Borssele I and II Offshore Wind Farms in July, at what was at the time a record low price of €72.70/MWh. A few months later in September, Vattenfall placed the lowest bid on the Danish Near Shore Wind Tender for the 350 MW Vesterhav Syd and Vesterhav Nord wind farms, at €60/MWh.

In short, these are exciting times for clean energy, as costs - already competitive with fossil fuel-fired generation in a large number of cases - continue falling...with no end in sight.