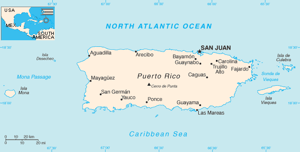 Just before the Fourth of July holiday weekend, President Obama signed legislation that amounted to "a massive rescue package to address Puerto Rico’s debt crisis — just one day before the island must make a $2 billion payment." The Puerto Rican debt crisis is complicated, with numerous factors causing it. One of those factors, as the New York Times reported back in February, relates to "how Puerto Rico’s power authority has piled up $9 billion in debt." Two paragraphs in particular jump out at us (bolding added for emphasis):

...the island’s government is running out of cash, facing a total debt of $72 billion and already defaulting on some bonds — and an effort is underway to limit the free electricity, which is estimated to cost the power authority hundreds of millions of dollars.

...The free electrical power is just one example of the power authority’s complex and paradoxical role in the economy here. On Tuesday, [Puerto Rico Senate President Eduardo] Bhatia will begin hearings to determine who and what are to blame for the authority’s larger problems, especially its ancient and inefficient power plants, among the last in North America to burn oil. Culprits are expected to include the authority’s secretive purchasing managers, elected officials who wasted money on natural gas pipelines that were scrapped and an institutional hostility to wind and solar power that is hard to fathom on a breezy island where the sun shines most days.

The answer, as this op-ed in The Hill (by Tom Sanzillo of  the Institute for Energy Economics and Financial Analysis, "a think tank focused on clean energy issues")  argues:

What’s overlooked in Puerto Rico’s debt crisis is how so much of it can be tied back to a dangerously fossil-fuel dependent and debt-laden electricity system...The Puerto Rico Electric Power Authority is deep under water, to the tune of $8 billion...

...Wrapped up in the thinking around how to reverse the island’s debt crisis is a deeply misguided refinancing of the power authority that gives bondholders a blank check and remakes the island’s electricity system into one almost wholly reliant on imported natural gas...

The irony in the Puerto Rico debt story is that the island is blessed with abundant sunshine, a resource that is all but ignored in the plan to switch the power authority from its current imported-oil-dependent grid to one tied almost completely to imported natural gas.

Indeed there is inexplicable and staunch institutional resistance in Puerto Rico to harnessing solar energy, which is now cost-competitive with traditional electricity-generation and spreading globally. A report we published in September shows how a new mindset among elected officials and utility managers would help right the ship.

Clearly, given the facts outlined above, switching from burning expensive, dirty fuel oil and other fossil fuels to clean energy - solar, wind, energy efficiency - would make an enormous amount of economic and environmental sense for Puerto Rico. Perhaps Puerto Rico might want to follow the lead of another island, Hawaii, in moving to 100% renewable energy?