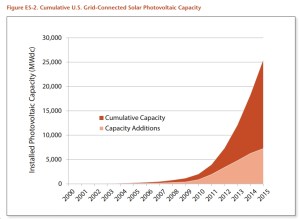 A brand-new report by the Frontier Group and Environment America's Research & Policy Center looks at "The Top States that Helped Drive America's Solar Energy Boom in 2015."  Key findings include:

By the way, on the theme of positive news for solar power, we're also struck by this article in PV Magazine, which cites Deutsche Bank Research Analyst Vishal Shah as forecasting that utility-scale solar power costs in the U.S. will fall below $1 per watt over the next 12-18 months. Which means, of course, that solar power will increasingly beat coal- and natural gas-fired power on a price basis alone, not even considering the negative "externalities" (pollution, water use, etc.) that characterize fossil fuels.