"Solar is a technology, not a fuel": Why the Transition to a Clean Energy Economy Could Be Faster than Expected 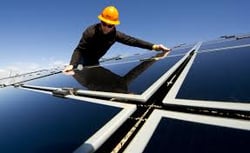 Two recent articles on the transition to a clean energy economy are well worth amplification. First, see Bloomberg's "The World Nears Peak Fossil Fuels for Electricity," which discusses the New Energy Outlook 2016 by Bloomberg New Energy Finance. A few key points from that report include:

Note in particular the comment about solar power being a "technology, not a fuel," and how that means solar "gets cheaper and more efficient over time." That point segues nicely into the second article that caught our eye, by David Roberts of Vox, entitled "Energy transitions are usually slow. Here’s why the clean energy transition might be faster." Roberts' key points echo and reinforce BNEF on the plummeting costs of clean energy.

In sum, the transition to a clean energy economy could happen a great deal faster than anyone has been thinking, because the very nature of clean energy - a technology, not a fuel; "small, smart, nimble" and distributed - is radically different, and clearly much better, than what came before. And that's great news for everyone, other than perhaps the fossil fuel industry.