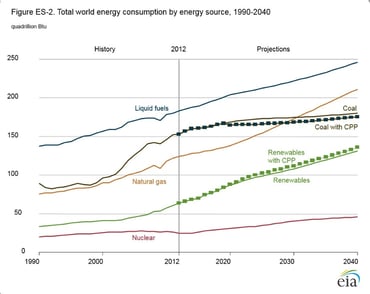 The U.S. Energy Information Administration (EIA) is out today with its 2016 International Energy Outlook, and there's a lot to chew on. Here are a few, initial highlights that jumped out at us.

A few caveats and considerations in reading this report. First, it's important to point out that, as David Roberts recently reminded everyone, that "EIA's modeling is just that — modeling," reflecting "the assumptions that go into it...about policy, technological innovation, and evolving costs."

Second, the above highlights are all from EIA's "reference case," which as EIA notes is simply its "business-as-usual trend estimate, given known technology and technological and demographic trends, and "assum[ing] that current laws and regulations are maintained throughout the projections." That's what EIA is required by law to do, but reporters, policymakers and the public need to keep this fact in mind when considering how they interpret the new EIA "forecasts."

Third, as DeSmogBlog wrote in March, it's become "something of an annual tradition" for EIA to put out renewable energy forecasts that "consistently...shortchange the potential of renewables." As Michael Goggin of AWEA put it last May, "There seems to be consistent bias in EIA's projections against renewable energy, and that's a different thing from being inaccurate." Definitely keep that in mind when reading this new report.

Fourth, it seems implausible that coal consumption will continue growing through 2040. In fact, according to the International Energy Agency (IEA) a few months ago, "[f]ollowing more than a decade of aggressive growth, global coal demand has stalled, with the IEA's Medium-Term Coal Market Report 2015 having "slashed its five-year estimate of global coal demand growth by more than 500 million tonnes of coal equivalent (Mtce) in recognition of the tremendous pressures facing coal markets."

Finally, EIA's latest "reference case" projections don't seem to gibe, in several key areas, with what industry analysts have been observing recently. For instance, the concept that in 24 years, electric vehicles will only make up a tiny share of the world's transportation doesn't seem to make sense at all, particularly given massive orders for the recent Tesla Model 3 electric vehicle. It also seems implausible that all clean energy sources - wind, solar, etc. - will only match coal for power generation in 2040, and not much sooner. And last but certainly not least, the concept that world CO2 emissions, which nearly every climate scientists says must be slashed "ASAP" to avoid climate disaster, will continue rising through 2040 (and beyond?), in and of itself demonstrates that the EIA "reference case" projection simply can't happen. All of which brings us back to EIA's clean energy growth projections clearly being too low, for a number of important reasons (e.g., that clean energy costs have been plummeting, and show no signs of leveling off).