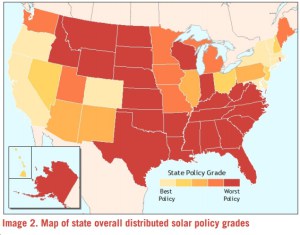 Last fall, Environment America issued a report looking at the top ten states from a policy perspective for solar power growth as of 2014. Those states included Hawaii, Arizona, Nevada (note that this state's ranking almost certainly has fallen sharply in recent months -- see here for more), California, New Jersey, New Mexico, Vermont, Massachusetts, North Carolina and Colorado. These states made the top 10 due to strong policies in the areas of solar net metering, Renewable Portfolio Standards (many with solar "carve-outs"), PACE and other means of creative clean energy financing, etc.

In contrast, a new report out today looks at the other end of the spectrum: "10 Sunny States Blocking Distributed Solar Development." The following are the 10 states, with a short explanation as to how they make it tougher on cleantech companies than in the strongest solar states. Keep in mind that all of these states have high solar power potential, which is a major reason why they made this list.