"A move to 100% renewable power is practical, achievable, economically sound and overwhelmingly popular." 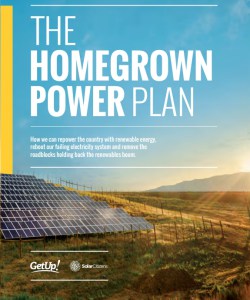 The words in the headline are from a new report about moving rapidly to 100% clean energy in Australia, but they could apply just as well to the United States. Let's look at the key points of "The Homegrown Power Plan," keeping in mind that Australia at present is overwhelmingly powered by fossil fuels. In other words, if a rapid transition to 100% clean energy can be carried out in Australia, it certainly can happen here.

If you think about each one of these points, it's clear that they can be applied to the United States as well. As in Australia, we are stuck with an antiquated, top-down, dirty and expensive electric utility model that needs to be replaced. Fortunately, we also have enormous clean energy potential, with enough potential in clean energy resources so that "the projected 2050 U.S. electricity demand can be met many times over by renewables." And we also have movement in the right direction, although it needs to be speeded up. The only question is whether our system of incentives and laws catches up to the clean energy revolution that's taking place at increasing speed, or whether we continue to allow powerful, entrenched fossil fuel interests to slow down the inevitable transition to a 100% clean energy economy. The correct answer is clear.