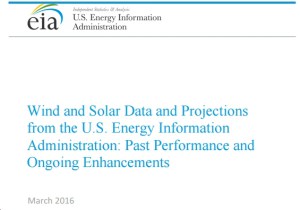 Over the past few years, the U.S. Energy Information Administration (EIA) has been widely criticized for consistently and significantly underestimating the growth of renewable energy, both in the U.S. and the world. For instance, see the December 2013 post here on Scaling Green, "EIA Renewable Energy Forecast Isn’t Just Wrong, It’s Wildly, Laughably Too Low." As we pointed out then:

Now, EIA has fired back, with a new report, "Wind and Solar Data and Projections from the U.S. Energy Information Administration: Past Performance and Ongoing Enhancements." According to EIA, the criticisms it has received are unfair, as its reference cases "explicitly assume current laws and regulations in place at the time the projections are developed, consistent with EIA’s mandate to provide a neutral baseline for policy analysis." EIA adds, "When policies are assumed that support renewables, EIA’s projections show significantly higher penetration rates for both wind and solar than when such policies are not considered." EIA does admit that when it comes to solar, "some significant gaps between projected and realized outcomes are apparent, even when policy assumptions used in making the projections align with realized policies." EIA correctly points out that, "like many other industry trend watchers, [it] did not anticipate the sharp decline in solar PV costs seen over the past several years." Finally, EIA claims, without any evidence, that its "market projections for wind and solar electric generating capacity provide a reasonable basis for understanding the impacts of laws, policies, and market conditions on the growth of renewable energy markets."

With that in mind, here's a quick review of how EIA's done recently when it comes to wind and solar forecasts.

Perhaps an even bigger problem than badly missing clean energy forecasts for 2015 is that EIA's long-term forecasts, out to 2030 and beyond, consistently show extremely low growth rates for U.S. wind and solar power capacity. That includes the 2012 AEO, which shows only 8.6% annual growth for solar power capacity out to 2035 -- an absurdly low growth rate given what we're seeing actually happening. In fact, far from growing by only 8.6% per year, Greentech Media recently predicted U.S. solar power capacity growth of 119% in 2016, with continued rapid growth in the 2017-2021 time period as well.

The bottom line is that, yes, EIA is obligated to base its forecasts on current U.S. policy. However, even given that constraint, EIA's forecasts for wind and solar have been consistently and wildly low, both for 2015 and in the long term. The question is not just why that's the case, but more importantly what EIA's doing to correct it. Unfortunately, none of that has been cleared up by release of EIA's new report on its forecasting track record.

P.S. Also see Jigar Shah's response to EIA, which states: "Solar power is cost effective with only the 10% permanent tax credit, but EIA says that is absolutely not possible.  It is like they don't know how to do math.  You tell me whether their response admitted these fundamental facts or if they took a "holier than thou" tone to explain to us that they got it right the whole time -- we just looked for the data in all the wrong places."