Despite Urgent Need to Phase Out Fossil Fuel Subsidies, They Continue at "an eye-watering $452 billion every year" 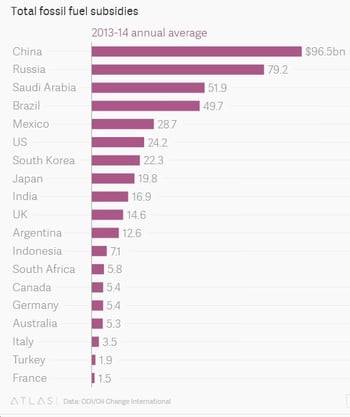 We've written frequently here at Scaling Green about the enormous amounts of taxpayer-funded corporate welfare flowing to the fossil fuel industry -- see IEA: Fossil Fuels Get $550 Billion/Year in Subsidies, 4x More than Clean Energy, “The fossil fuel industry receives billions in taxpayer subsidies as the wind industry fights to take flight”, for instance. We've repeatedly emphasized both that the science is absolutely clear regarding the damage excessive reliance on fossil fuels is doing to the environment, health, national security and other "negative externalities." Clearly, throwing the fossil fuel "welfare bums" off of their taxpayer-funded-subsidy gravy train is an urgent matter, for a host of compelling reasons.

Yet somehow, as a new report by Oil Change International and the Overseas Development Institute finds, the gravy train rolls on. In fact, it's even increased in the United States since 2009. As a recent Quartz article explains:

So why are rich governments still paying hundreds of billions every year to prop up the production of everything from coal to crude? The question was posed again this week in a report (pdf) from the UK’s Overseas Development Institute, a think tank, and Oil Change International, an NGO that advocates for a reduction in the use of fossil fuels.

The total figure they came up with was an eye-watering $452 billion every year.

That's right: $452 billion a year flowing to environment-destroying, increasingly uneconomic fossil fuels, even as the planet heats up due to fossil-fuel-induced global warming, and even as countries prepare to meet in Paris at a climate summit aimed at doing something about this problem. Well, one thing the Paris summit could do would be to agree that subsidizing the same dirty energy sources that are turbocharging global warming makes absolutely no sense whatsoever, and should be ended immediately. While they're at it, they could pledge to use that money to accelerate the transition to a 100% clean energy economy as rapidly as possible. For now, though, the money's flowing in exactly the wrong direction, to a dirty energy industry that neither needs it nor deserves it. At long last, that needs to end.

ScalingGreen is a project by the Cleantech Public Relations Firm, Tigercomm.