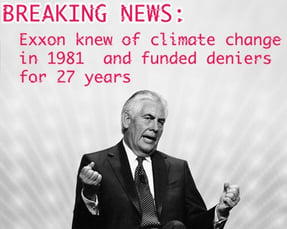 In a memo released earlier this month, ExxonMobil went into damage control by releasing several statements:

ExxonMobil claims it’s a champion of scientific research and finding solutions to climate change, but the company’s actions lead to a radically different conclusion.  First, let’s realize that the majority of the scientific community, 97% or higher, agrees that climate change is real and caused by human activity, particularly the combustion of fossil fuels which emits greenhouse gasses.  Yet ExxonMobil somehow remains unsure as to whether there is a link between burning fossil fuels and climate change, since it’s so “complex” to them.  So “complex” in fact, that ExxonMobil knew about it back in the 1970s, based on its own employees' research and models.

So what changed between the confirmation of anthropogenic climate change by Exxon’s own scientists nearly 40 years ago and today?

Actually, today we are far more certain that the climate is changing for the worse, and that humans burning of fossil fuels is the main cause. The “complexity” relates mostly to exact timing, how terrible things can get, like the oceans dying or other negative future conditions –and how we can best reduce the chances of disaster. As part of ExxonMobil’s attempt to play down the danger of climate change, they posted a graph from the IPCC’s report from 2013, showing the near term projections of global temperature, relative to 1986 to 2005.  In response to ExxonMobil’s graph by IPCC, one notes even the IPCC’s lowballing of the temperature increase is not enough to mitigate the damage by climate change. The graph does not account for compounding factors like increased acidification in the oceans or longer term affects like the melting of permafrost in the sub Arctic.

What appears to have happened is ExxonMobil’s own scientists were simply ignored by the company's top executives, because the implications of the science were too “inconvenient” for this gigantic and extremely profitable fossil fuel producer to deal with. Today, thanks to superb, cutting-edge investigative journalism by InsideClimateNews, we know in great detail what happened.

To summarize, ExxonMobil – the largest oil company in the world – was told nearly 40 years ago, by its own scientists no less, that the company’s primary product was damaging the environment and would have disastrous results for the future.  Instead of dealing responsibly with that, what ExxonMobil did was the exact opposite:  the company launched a well-funded, long-term effort to throw the fundamental science of climate change into question. The goal was to slow the world’s transition off of fossil fuels - not coincidentally ExxonMobil’s main line of business - and onto clean energy.  This was a classic example of creating opinions and peddling them as product or propaganda, what is known as engineering consent.

ExxonMobil’s decision led, among other things, to several decades of funding for climate denial groups. Those include the clean energy bashing America Legislative Exchange Council (ALEC) and phony “research” organizations, such as the notorious Heartland Institute.  So, even as the science of climate change has become increasingly definitive, ExxonMobil has doubled down on its efforts at creating a smog cloud of denial, even while (falsely) claiming to no longer support climate science denial groups.

So why does ExxonMobil champion the continuation of climate denial funding and fossil fuel use?

Simple: It’s all about money.

According to a former Exxon scientist and co-author of the 2007 IPCC report, the environment is only a concern to Exxon to the extent it affects the company's earnings. That is why ExxonMobil’s continued funding of climate science denial efforts and its fight against renewable energy is so blatantly, and purely, motivated by greed. Today, we can add in an element of urgency for ExxonMobil and other fossil fuel companies, as the price of renewables like solar and wind have plummeted in recent years, making them increasingly viable competitors with fossil fuels. Heck, even major oil exporters like Saudi Arabia, are increasingly looking to clean energy to power their economies.  No wonder ExxonMobil is worried.

While ExxonMobil feigns support efforts at fighting climate change, the company’s record speaks for itself – all else is hot air, smog and mirrors, etc.  Thus, while renewables grow rapidly worldwide, ExxonMobil continues to champion fossil fuels at the expense of the planet. Profit over people has always been the way for ExxonMobil, even if the company tries to “greenwash” its dirty image.

Unfortunately for ExxonMobil, most people are not buying the oil behemoth's propaganda, just as the tobacco industry ultimately failed in its efforts to deny the link between smoking and cancer.  Also just like the tobacco industry, potential new threats to ExxonMobil could be litigation and investigations by the Department of Justice under RICO or other laws. This all means that despite its enormous resources and political power, ExxonMobil executives have a great deal to be worried about these days.