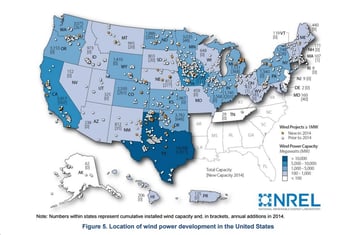 On Monday, Chris Mooney of the Washington Post highlighted the "U.S. wind energy boom" and how it "couldn’t be coming at a better time...when it comes to reducing carbon emissions." Mooney's article was based heavily on two new reports by the U.S. Department of Energy -- the 2014 Wind Technologies Market Report and the 2014 Distributed Wind Market Report -- both of which are well worth reading. We've taken a look, and here are a few key points.

Overall, these reports deliver highly encouraging news when it comes to the U.S. wind power industry, and as Chris Mooney points out, that news "couldn't be coming at a better time." Now, the challenge will be for federal and state policymakers to ensure a favorable policy environment for continued growth in abundant, clean, increasingly inexpensive wind power in the years to come.