James Hansen: Earth Can Avoid Climate Disaster "if we make the price of fossil fuels honest" 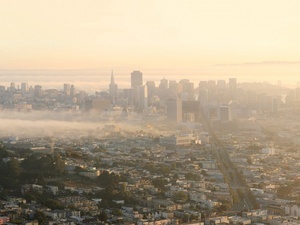 According to former NASA scientist James Hansen, "whose congressional testimony put global warming on the world’s agenda a quarter-century ago," humanity could be facing climate disaster - including "sea level rise of several meters" - by 2100.  Unless, that is, we make a rapid transition from fossil fuels to clean energy, a smart move for economic reasons even if you don't care about the future of the planet. Here's a simple way we can do that.

Hansen too is confident that the world “could actually come in well under 2 degrees, if we make the price of fossil fuels honest.”

That means making the market price of gasoline and other products derived from fossil fuels reflect the enormous costs that burning those fuels currently externalizes onto society as a whole. Economists from left to right have advocated achieving this by putting a rising fee or tax on fossil fuels. This would give businesses, governments, and other consumers an incentive to shift to non-carbon fuels such as solar, wind, nuclear, and, best of all, increased energy efficiency. (The cheapest and cleanest fuel is the fuel you don’t burn in the first place.)

But putting a fee on fossil fuels will raise their price to consumers, threatening individual budgets and broader economic prospects, as opponents will surely point out. Nevertheless, higher prices for carbon-based fuels need not have injurious economic effects if the fees driving those higher prices are returned to the public to spend as it wishes. It’s been done that way for years with great success in Alaska, where all residents receive an annual check in compensation for the impact the Alaskan oil pipeline has on the state.

That's right, we really can have our cake and eat it too -- a healthy environment and a thriving economy by switching from fossil fuels to clean energy. What's not to like?

P.S. While we're at it, the world can also ditch the astounding $5 trillion per year we spend to subsidize fossil fuels.