We've been making the case consistently for years now that moving from a dirty, unsustainable energy economy to a clean, sustainable one makes sense for a host of economic, environmental and national security reasons. The good news is that the industry is making progress with rapid growth in clean energy penetration that is hailed as a "tipping point” for the technology.

The economics of clean energy have no doubt arrived. As a recent study by Lazard made clear, wind and solar technologies keep getting cheaper and more powerful, a trend that is expected to continue for the foreseeable future. No wonder why the International Energy Agency recently predicted that solar "could be the world's largest source of electricity by 2050," and also why the G-7 nations just called for a transformation of electricity generation towards clean sources.

Now, a study by Stanford University engineers details how the U.S. can convert to about 80 percent renewable energy from wind, water and solar by 2030 and 100 percent by 2050. As usual, David Roberts (formerly of Grist, now writing at Vox) explains it very well. 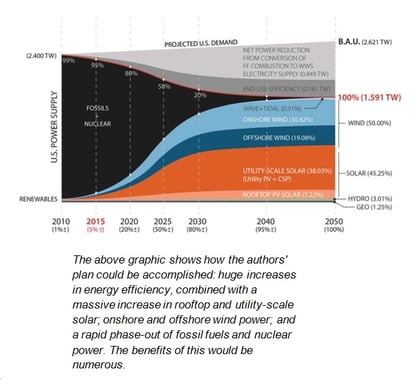 The question for the clean energy industry is how to help make this vision a reality.
Mark Sokolove, Executive Vice President of Tigercomm, has been working with cleantech leaders on strategic communications to overcome political and policy hurdles.

“Incumbent energy industries are heavily funded by people like the Koch brothers who inject large amounts of resources into media relations and lobbying," says Sokolove who has seen huge progress in the industry over his 15+ years as a public relations practitioner.

Sokolove suggests analyzing your business’ or organization’s current external threats and identifying news-making and content generation opportunities. He asserts that this, combined with tight consistent messaging, can help turn the tide against anti-clean energy interests.

“Every on-message headline or piece of visual content brings us one step closer to closing the gap between misinformation funded by the fossil fuel industry and the truth. Since the cleantech industry doesn’t have the history and financial backing that fossil fuels do, the sector needs to work together in building out communications and advocacy infrastructure to help scale clean energy technologies.”