Solar Power Grows by Leaps and Bounds in USA...But NOT in Virginia 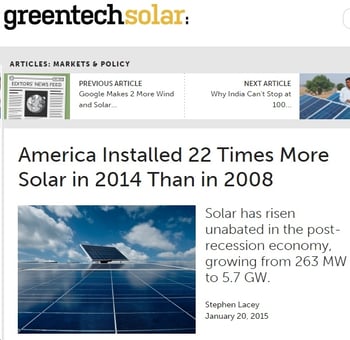 The other day, I ran into yet another article - on the superb website Greentech Media - regarding the rapid rise of clean energy in America. The numbers this article ("America Installed 22 Times More Solar in 2014 Than in 2008") presents are truly eye popping.

More than 80,000 new jobs have been created in the industry since then. Today, one company, SolarCity, is booking almost as much solar capacity in one quarter as the entire industry put on-line in all of 2008.

So, yeah, solar power installation in this country is growing by leaps and bounds as the cost of solar plummets. And no, the fastest-growing states are not just in the Desert Southwest, but also in northern and mid-Atlantic states like Colorado, Delaware, Massachussetts, New Jersey, North Carolina, Vermont, Maryland, Connecticut, Oregon and Pennsylvania. Notice a state missing here? That's right, Virginia, also known as the "Old Dominion, with the emphasis on the word "Dominion" - as in Dominion Virginia Power, a largely fossil-fuel (and nuclear) utility which essentially owns the Virginia General Assembly, as well as the powerful State Corporation Commission, which ostensibly is supposed to regulate Dominion.

So, what have the results been in Virginia (note: we're focusing on Virginia because Tigercomm is located there, and also because it's an excellent case study into the effect of clean-energy-unfriendly policies), with Dominion and its fossil-fuel-funded friends in the state legislature blocking and tackling for dirty, carbon-based fuels, while doing their utmost to stymie the explosion of clean energy (wind, solar, energy efficiency, etc.) we're seeing in the rest of the country and world?

Wow, 1,000 homes out of millions. Yes, that number really is as pitiful as it looks. The frustrating thing is that the situation is pitiful not because Virginia is lacking in sunshine, wind, or potential for energy efficiency gains, but simply because of bad policies.

On the upside, policy is something we can change, at least in theory. Of course, the "powers that be" could decide not to change policy, but that won't help their pals at Dominion Power in the long run. For more on that, see David Roberts' superb article, Rooftop solar is just the beginning; utilities must innovate or go extinct.

So, Dominion (and Virginia more broadly) has a stark choice: 1) continue to fight inevitable change, saddle Virginians with dirty energy for years to come, yet eventually see the entire business model collapse anyway (what Roberts calls the "death spiral"); or 2) adapt to a changing world, one in which even oil-rich Middle Eastern countries are moving heavily into solar power for purely economic reasons -- because its price is low and heading lower. It seems like an easy call to make, but as we saw just this morning, with the defeat of a Virginia renewable energy tax credit bill (by Del. Rip Sullivan) in a House of Delegates committee, there are a lot of politicians who still don't "get it."