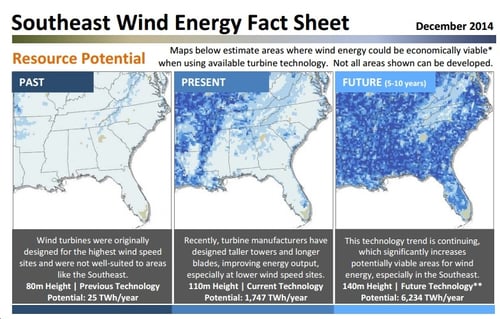 NREL estimates the technical potential within 50 miles of the coast of VA, NC, SC, and GA to be about 583 gigawatts, which which is equal to about two times the electricity demand of every coastal state from Maine to Florida. This region has the potential to be a significant exporter of offshore wind energy.

In sum, not only could the southeastern U.S. produce all of its power from wind, it could produce enough to export, potentially earning billions of dollars for the regional economy. Of course, offshore wind power is more expensive than onshore wind power, but as with everything else, costs will come down sharply once we start building "to scale" (see this study for some thoughts on that topic). Also keep in mind that wind power emits no health-and-environment-damaging pollution, whether we're talking about greenhouses gases, toxic substances of various kinds, particulates, whatever. Offshore wind power doesn't require removing the tops of mountains. It doesn't "spill" like oil does. It doesn't contaminate our water supplies or require massive amounts of water to produce it, as "fracked" natural gas does (in fact, wind power requires ZERO water to produce). It's not even an "eyesore," since it would be located well offshore.

So what's the holdup? Basically, it's two major things: 1) counterproductive, dysfunctional, nonsensical, or to be nice "suboptimal" public policy, which massively subsidizes fossil fuels, while tilting the playing field in a myriad of other ways (e.g., not correcting for market failure by imposing a sizable tax on fossil fuel's pollution) against clean energy and in favor of dirty energy; and 2) the fact that offshore wind power currently costs somewhat more than heavily-subsidized, non-internalized fossil fuels (although, on that point, see the graph below regarding cost trends for onshore wind vs. natural gas).

Of course, to correct #2, we need to fix #1. And that will require our political leaders to realize what a huge opportunity their states are missing due to the failure to exploit their tremendous wind power potential. Let's hope that fact sheets like this one will help to change their minds. 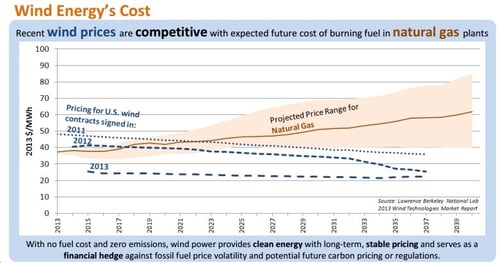