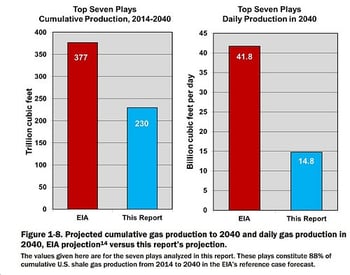 According to the U.S. government's latest long-term forecast, the country can expect a "56% increase in total natural gas production from 2012 to 2040," with shale gas production "the largest contributor, growing by more than 10 Tcf" through 2040; and with "tight gas" production also growing sharply over that time period.

As for "tight oil," the official U.S. government forecast has it growing through 2021, after which it gradually falls through 2040, at which point it is still nearly 1 million barrels per day higher than it was in 2012. In sum, the official U.S. government forecast for the U.S. oil and natural gas "fracking" boom is most definitely bullish, particularly for natural gas but also for oil. But is this actually true?

Not according to the Post Carbon Institute (PCI), which is out with a new study called "Drilling Deeper: A Reality Check on U.S. Government Forecasts for a Lasting Tight Oil & Shale Gas Boom." A few key points from this report are: