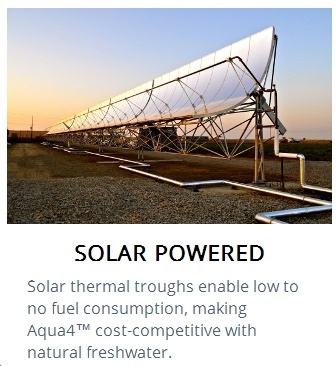 Using sunlight to produce clean water? Sounds like a great idea to us.

...in order to counter California's drought, the push must be toward renewable desalination plants rather than fossil-fuel dependent facilities that further contribute to climate change.

That's right, the solar desalination facility costs HALF what the fossil-fuel-powered one does. Meanwhile, on a related note, a new report finds that "wind energy protects water security."

The AWEA has done its own calculations on the savings that were made from 140 million MWh of wind-generated power in the U.S. More than 30 billion gallons of water was saved using wind power that year instead of fossil-fuel generated power. That’s 97 gallons for every person in the U.S.

And last year’s savings? According to the AWEA’s website, the wind projects that were funded in part by tax credits under the American Recovery and Reinvestment Act Section 1603 in 2012 saved an estimated 35 billion gallons of water, or 120 gallons per person, in 2013.

“The power sector withdraws more water than any other sector in the United States, including the agricultural sector,” says the AWEA. “By displacing electricity generation from other sources, wind energy not only avoids CO2 emissions and pollutants, but also avoids water withdraws and consumption, preserving the water for other uses.”

In sum, solar and wind power's many advantages over fossil fuels also include water security, an increasingly critical issue in a world experiencing more extreme droughts due in part to climate change.