BP CEO "perplexed" at "why do people hate oil companies?” 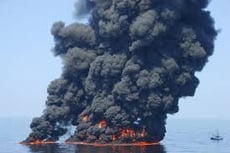 In a new interview, BP CEO Robert Dudley says he is "perplexed" at the question "why do people hate oil companies?" According to Dudley:

People in oil and gas are sort of perplexed by this. In most places, countries are really proud of their energy industries. They’re thought of as a good thing, as part of the progress in bringing prosperity to the country. But it’s very different here. People don’t like having to pay for something that they have to go to every day, whether it’s filling up your car or—you don’t like to get the electric bill every month or the water bills.

Since Dudley's obviously confused, we'll help him out a bit. Why do people hate oil companies? How about a few examples to jog Dudley's memory a bit: