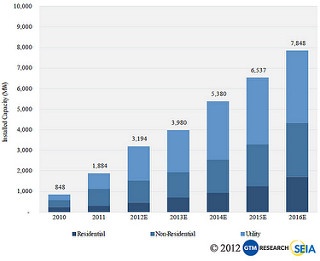 The Solar Energy Industries Assocation (SEIA), along with GTM Research, is out with its U.S. Solar Market Insight report for the third quarter of 2012, and it's a good one.  Here are a few highlights, bolding added by us for emphasis.

All of this is excellent news, now the key is to keep it going in 2013 and beyond.