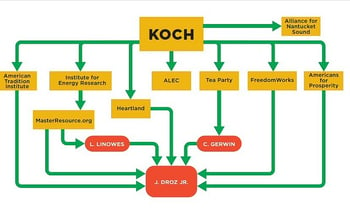 A new report by the Sierra Club follows the money trail behind the "attack on renewable energy." A few of the key points are as follows:

As we've written before, this is a full-contact competition - one the clean energy industry must play to win.

UPDATE: Stephen Lacey of Climate Progress is spot on, that the key to beating back dirty energy propaganda is local businesses, entrepreneurs, and advocates sticking up for their industry.