It’s Electric! (Cars That Is, Not Tacky Wedding Dances) 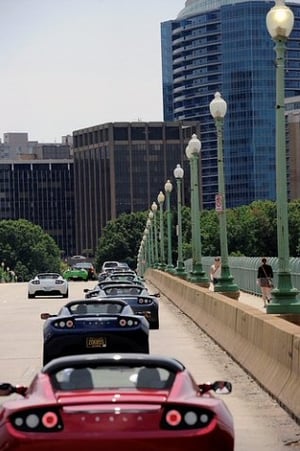 Yesterday’s ACORE forum on the intersection of transportation and renewable energy left me pretty psyched about running down to DC’s Tesla store and putting in an order for a Roadster. Then the reality that I don’t need a new car sunk in, so I jotted it down on my “things to buy when I win the lottery and have a two-car garage” list.

But, as exciting as a future without pumping gas sounds, there are a few issues we need to consider to get there smartly. For example, Phyllis Cuttino, director of Pew’s Clean Energy Program, mentioned that their focus was on the electrification of transportation. However, there is a serious, unforeseen consequence behind this drive for electrification.

Today, a switch to an electric vehicle (EV) is really just swapping petroleum as a fuel source with significant quantities of coal. That’s because coal remains the largest source for electricity generation in America. EVs do address our dangerous dependence on foreign oil and eliminate tailpipe emissions, but a scaling this technology could also mean substantially increased electricity consumption. As we move forward, we need to look at how the electricity these vehicles use is being generated.

Yesterday’s forum offered a couple of interesting ideas that could help address this issue. Erin Geegan of Zam Energy presented her company’s mission of smart solar-powered carports equipped with EV smart charge technology. Solar-charged EVs are powered both domestically AND cleanly.  There’s a great example of this in Connecticut, where GE provide its employees with the benefit of being able to charge their cars while they’re at work.

Catherine Dunwoody of the California Fuel Cell Partnership raised another smart concept. By using renewable electrolysis to produce hydrogen for a fuel cell vehicle, you achieve a 100 percent reduction in greenhouse gas emissions from a traditional combustion engine. And Orange County, CA, has taken another innovative approach to hydrogen fueling by using biogas.

These are the kinds of projects that truly get me excited about the future of transportation in America. But it’s only by addressing our energy usage residentially, commercially, and on the road that we’ll be able to scale a domestically-powered, clean economy. Kudos to ACORE for kicking off that conversation.

P.S. The above photo -- a parade of Tesla electric vehicles aimed at Tigercomm’s Arlington, VA headquarters -- is courtesy of Tesla Motors.