The following is cross-posted from the Checks and Balances Project with permission.

Thursday, Doc Hastings is holding yet another, carefully scripted, incredibly slanted hearing to promote his position that the Department of the Interior should return to the rip-roarin’ land grab of the Bush era. The good ol’ days when oil and gas companies could snatch up millions of acres of public land for song – or a few beers, or some cocaine, etc. (*ed note – referring to the MMS employee scandal. see link for more details.)

Hastings has been pushing his pro-oil, pro-gas agenda since becoming chairman of the Natural Resources Committee in January. He’s turned ignoring facts in favor of rhetoric into something of an art form. 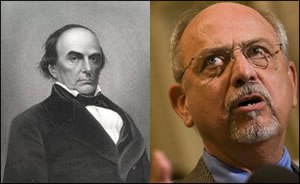 In one very telling – and a little funny – example, Hastings submitted an op-ed to The Hill in February. In his essay, he cited the words of Daniel Webster:

“It would be in our best interest to heed Daniel Webster’s words that are prominently inscribed on the walls of the House Chamber, ‘Let us develop the resources of our land … and see whether we also, in our day and generation, may not perform something worthy to be remembered.’”

The problem is that Hastings deprived Secretary Webster of his First Amendment Rights, because the full quote is:

“Let us develop the resources of our land, call forth its powers, build up its institutions, promote all its great interests, and see whether we also, in our day and generation, may not perform something worthy to be remembered.”

“Build up its institutions, promote all its great interests.” It occurs to me that those words could refer to the need to protect public lands, and promote all their uses, such as the outdoor recreation industry, responsible for 6.5 million jobs. I can only assume that when Hastings performed this little exercise in censorship, he was afraid to clutter the issue with contrary information, or the truth.

(Also, Webster gave this quote during the laying of the cornerstone for the Bunker Hill monument in Charlestown, MA. It has nothing to do with drilling for oil or gas.)

Hastings refused to acknowledge words in a nearly 200-year old quote in order to make his point. He displays that same willingness to censor the facts relevant to Big Oil and Big Gas. For instance:

There’s no reason to believe Doc Hastings will change his stripes. Big Oil and its allies spent more than $146 million lobbying Congress in 2010, and Hastings reports almost $156,000 in campaign contributions from oil and gas corporations during his time in office. As long as Hastings has a pulpit, he will speak loudly for Big Oil and Big Gas. The media and the public will need to be vigilant in examining what he says. Odds are, we’re only getting one side of the story.

Oh, and Hastings ended that op-ed saying, “In recognition of Daniel Webster’s astute words…” Did you mean all of them Mr. Chairman? Or just the ones that make your point.