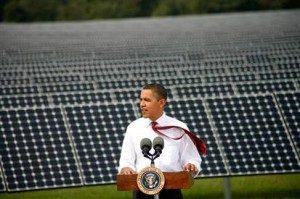 Secretary of Energy Steven Chu announced this morning that the administration will be installing solar panels and a solar hot water heater on the roof of the White House this spring. The announcement was made on the one year anniversary of Obama’s Executive Order 13514 that calls for his agencies to set an example for the country by improving their carbon footprint and energy efficiency standards.

The system, whose installer has yet to be chosen, will provide electricity and hot water for the White House Residence. Secretary Chu wrote in a blog post this morning that the project symbolizes the availability, reliability, and necessity of solar technology here in the United States

This announcement signals a victory for the Globama campaign, run by a coalition of solar stakeholders, including the Solar Energy Industries Association, climate change advocacy group 350.org, and the private solar company Sungevity. The campaign raised thousands of signatures in the past few months urging the administration to install solar panels on the White House and demonstrate leadership in clean technology.

Sungevity is also responsible for a similar project in The Maldives, where President Nasheed  installed panels on the roof of his residence alongside Sungevity founder Danny Kennedy. These two initiatives demonstrate the widespread acceptance of solar technology as an economically viable solution to combat climate change and begin the transition to a clean energy economy.